Iotosh steps into the spotlight with ‘Fee Fi Foe’ 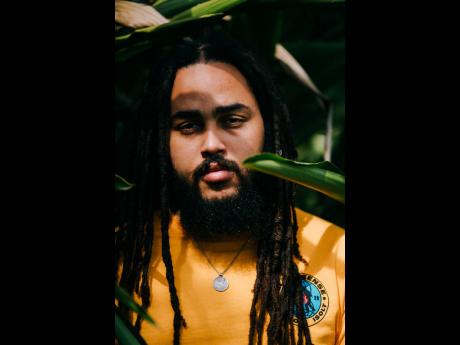 Contributed
Iotosh has released his first single since 2019, ‘Fee Fi Foe’, which he produced, along with Kareem ‘Remus’ Burrell.

Emerging artiste Iotosh has released his third single, and with a title like Fee Fi Foe (with an ‘e’), it is near impossible not to hear the terrifying roar, Fee-fi-fo-fum, of the giant – some call him Gogmagog – in the classic English fairy tale Jack & The Beanstalk. A listen to the actual song, and a peek at the animated video evoke some David and Goliath vibes as well, and that, the artiste says, is deliberate.

“ Fee Fi Foe is my first single since 2019 and third official solo release overall. The lyrics speak of resilience and overcoming gigantic opposition, referencing two of the most popular giant stories, Jack & The Beanstalk and David and Goliath. The message is that bigger doesn’t necessarily mean stronger,” he explained.

Articulate and possessing a confidence that is drenched in gratitude, Iotosh is as prolific a writer as he is a beat-maker, and it is in these areas that he has so far distinguished himself on the musical landscape. But the 23-year-old is also quite determined to make his name as a recording artiste. Fee Fi Foe, produced by him and Kareem ‘Remus’ Burrell, the son of legendary Xterminator producer Phillip ‘Fatis’ Burrell, was released on May 20.

“I have been making beats since high school, and also writing poems. My friend, Kyraxx, was always encouraging me to sing my poems, but to do that, you have to be confident of your delivery. Fee Fi Foe was recorded in 2019, but my career was young then, so I held on to it. It samples a dub version of one of Fatis’ classic productions, Gun Zalis, by Luciano and Remus was courteous enough to allow me to use it. With the credit that I have now, it feels like a good foundation for me as an artiste. It actually feels like my first song,” Iotosh elaborated.

He told The Gleaner that the single is doing very well, when compared to his previous efforts, which he admits were worthwhile learning experiences. “My first single in 2018, titled NTN, I was trying a ting,” he laughed. “Then my second try was more planned. It was released in July 2019 and was premiered on BBC Radio 1Xtra by David Rodigan, but I still didn’t fully understand the entire workings. This time around, there was a planned roll-out, an animated video and pitches to disc jockeys. Fee Fi Foe is being played in the UK, Kenya, the US and of course, Jamaica. And, most important, a lot of people have been telling me that they love it,” the producer, recording artiste, songwriter and multi-instrumentalist said.

Undoubtedly, his flow, lyrics and beat, combined with his deejaying/rapping delivery and catchy melodies, are the elements that make Fee Fie Foe rock. “My flow is kinda technical, and it is definitely unique,” he said modestly. And Iotosh also rhapsodises over the iconic bass line, which he says “combines with trap-esque drums to achieve a near-perfect blend of classic and modern reggae, reflective of Jamaica’s current musical landscape which [he] has helped shape”.

While his statement, single, may be evidence of his steady, upward growth as an artiste, his movement from amateur to professional in other musical spheres has been what he describes as “a blurred path”. However, he is in a more comfortable space now that he has been receiving some clear cut validation of his production work. Iotosh has produced and written songs for Protoje, Kyraxx, Jah9, Chronixx Lila Iké, Jaz Elise, Kabaka Pyramid, Jesse Royal, Vybz Kartel, Runkus, Zac Jone$ and many more in his relatively young career. And he is also now working on a new project for himself.

He admitted that the job sometimes comes with a conflict of interest with his own artistic aspirations, but he is wise enough to have learned when to let go.

“Even one of the songs on Protoje’s album, I wanted it for my project. But at that time, I didn’t have the confidence, so I pitched it to Protoje because the message would sound solid coming from him, and that too is important. I wrote the chorus and the first verse, and he vibed it and wrote the second verse. It’s hard sometimes, but you have to know when to let go for the greater good,” he concluded.