Review: ‘Godzilla vs Kong’ – Battle Of The Century 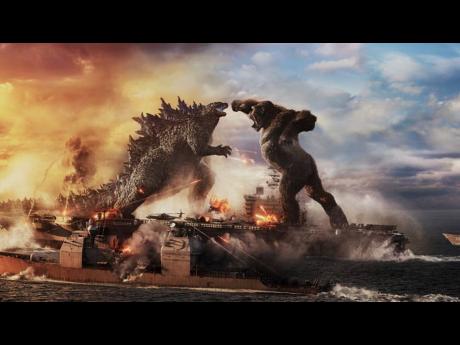 AP
This image released by Warner Bros Entertainment shows a scene from ‘Godzilla vs Kong’.

Welcome to the cinematic fight of the century. You’d think that after being crowned King of the Monsters, Godzilla would be sitting pretty, but heavy is the head that wears the crown, and you never know who’s looking to snatch it. In one corner, you have the soulful simian from Skull Island, Kong. In the next corner, fresh off his championship bout with King Ghidorah, it’s the thing your mother sees when she looks at a croaking lizard, Godzilla.

Godzilla may be the driving force of the plot, but the hero of this film is Kong. It’s crystal clear as the film opens with Kong starting his day. A mountainous yawn as the sun warms his face, Kong lazes about without a care in the world. The movie gives Kong a heart, as he lies on a boat, soaking in the heat and eating a barrel of fish all to himself. Just imagine Kong having a nice piece of Hellshire fish on a quiet Saturday afternoon. It is a respectable libation for any soul, monster or otherwise.

When they do finally fight, the film doesn’t disappoint in the spectacle. Godzilla vs Kong pits the monsters against each other in a wide variety of environments, like it’s selecting a level in a fighting game. It allows the combat to be less repetitive as their surroundings play to their various skill sets. For anyone who thinks they know the fight’s outcome before reaching the credits, the film keeps you guessing with a unique set of rules with every new matchup. There’s so much that goes into the characters of Kong and Godzilla, and certainly more than enough that could have been developed further. Instead, the movie drags as it explores its less interesting human element. So much of the film is devoted to setting up the battle of the beasts, but so little of it makes any sense. If not for the movie’s gigantic action, there would be nothing here worth seeing.

As a sequel, Godzilla vs Kong is an astounding devolution of its series that borders on parody and invites ridicule. It sprints through plot and dialogue like it’s offended at the suggestion it needs them, and throws only the most basic of foundations together. To be offended at this would be to miss the point. It’s all a ludicrous delivery system for an epic bout between two film icons, and is under no pretence of being anything more than that.

4. Catch It On Cable