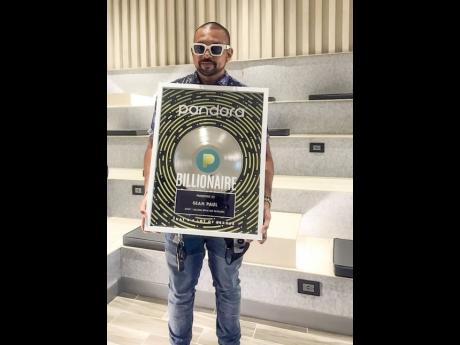 With well over one billion spins on Pandora, multi-award-winning recording artiste Sean Paul has been welcomed into the Internet radio and streaming services Billionaires’ Club.

The Gimme The Light deejay was surprised with a plaque commemorating the milestone this week, becoming the first Caribbean-based talent to be inducted into the small elite group with international hitmakers from all genres, including R&B singing sensations Janet Jackson and Monica, gospel music’s Kirk Franklin, and country-pop music singer Brett Young.

“This is a nice surprise,” said Sean Paul, who was made to believe he was on location at the AC Hotel for an interview.

“As a teenager coming up, I thought dancehall was huge. I never saw any difference between Michael Jackson or Shabba - even though the numbers were different. I have always been proud of how innovative and fresh our sound is, that there are different styles we could put in our music. And being one of the persons championing the international image of it, and be in the same club as Janet Jackson, who was a pin-up on my wall back then, is very cool,” he continued.

Pandora officially started its Billionaires’ Club in 2018 and expanded the artiste milestone programme with the launch of new stations like the Hip Hop and Pop Billionaires featuring music from Drake and Taylor Swift.

Reggae has had its own category on Pandora for close to a decade, with its curators putting the genre to the fore in late 2012 with the addition of the reggae rock, dancehall and dub stations. Diego Herrera, Pandora's head of Caribbean programming, says Sean Paul will now be added to many different stations that only have billionaire artistes.

Herrera said Sean Paul's success is a lesson to younger artistes. "There are recording artistes who understand how to increase their audience and that they have to, and we're in a time where the world is accessible — they can make music here and still reach audiences from a wide cross-section of listeners. That's a hurdle that some aspiring, and even established, acts [who are] still trying to reach those levels, need to get over. So, a lesson to younger artistes would be not to limit themselves, try different things and connect with artistes from other genres and innovate. Right now, Pandora continues to give our support to reggae and dancehall and, beyond that, to artistes like Sean Paul," Herrera said.