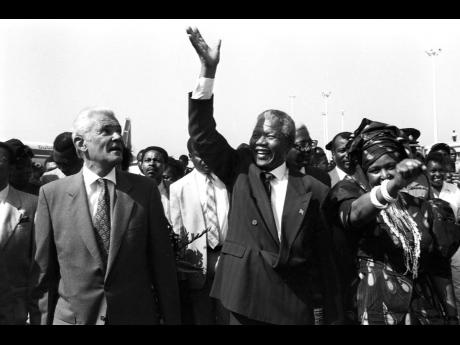 x
Nelson Mandela, then president of the African National Congress (ANC) of South Africa, waves in appreciation of the tumultuous welcome he received from Jamaicans in the waving gallery and on the tarmac at the Norman Manley Airport on July 24, 1991. Then Prime Minister Michael Manley (left), escorted the ANC leader, while Winnie Mandela (right), raises her clenched fist in the ANC salute to the crowd. 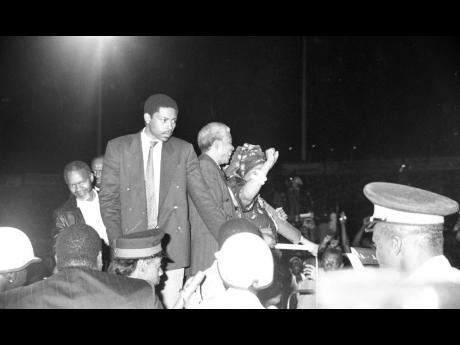 The Gleaner Archives
Jamaicans from all over lined up to see the Mandelas. In this photo, Winnie Mandela (right), raises her fist to the crowd as she stands beside husband, Nelson Mandela. 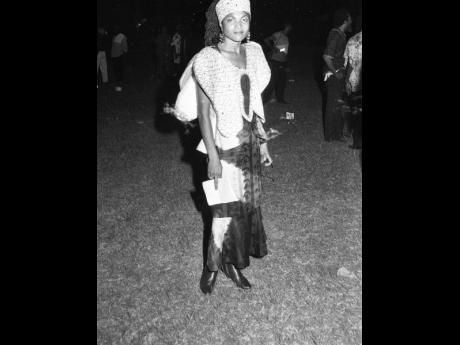 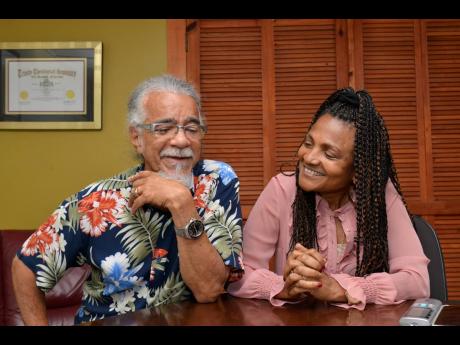 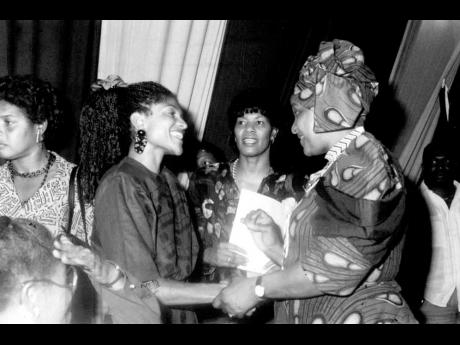 The Gleaner Archives
Singer Carlene Davis (left), one of the most powerful local singers in the fight for liberty for black South Africans, was singled out for special meeting by Winnie Mandela (right) on her visit to Jamaica with her husband Nelson Mandela. Davis’s two song ‘Welcome Home, Mr Mandela’ and ‘Winnie Mandela’ were like anthems during the visit of the Mandelas. At centre is Portia Simpson, then minister of labour, welfare and sports.
1
2
3
4
5

Nelson Mandela International Day was celebrated on July 18, which was also the 103rd birth anniversary of the freedom fighter and former president of South Africa. Mandela, one of the most celebrated and respected statesmen in the world, had a connection with Jamaica that went beyond the political arena; it was spiritual and musical.

In 1991, six days after his 73rd birthday, Mandela made a historic 24-hour visit to Jamaica accompanied by his then-wife, Winnie. In writing about that visit, exactly 30 years ago, the Jamaica Information Service website states, “On July 24, 1991, hordes of supportive Jamaicans flooded Kingston’s city streets in an effort to glimpse the man as he made the diplomatic rounds. Hundreds waited for him for hours along the streets while he had lunch at Vale Royal. Meanwhile, thousands more anticipated his arrival at the National Stadium.

“At a special reception at the Oceana Hotel Ballroom, there was an emotional outpouring that commenced with Lorna Goodison’s delivery of her poem Bedspread and ended with several humble Jamaicans trying to get personnel to hand the Mandela’s gifts and crafts made in their honour. Then Minister of Labour, Welfare and Sports Portia Simpson Miller had moderated the historic occasion.”

Veteran music industry all-rounder, Tommy Cowan, remembers the occasion very well. Cowan had paid tribute to Mandela with the song Welcome Home, Mr Mandela, sung by his wife Carlene Davis, and that song would play a key role in events that unfolded at the stadium during Mandela’s visit.

“Carlene and I were in England when Nelson Mandela was released from prison after 27 years, and we watched it on television. Right then and there, we wrote the song, Welcome Home, Mr Mandela, and I am happy to say that she got a chance to sing it for him,” Cowan shared with The Gleaner.

He recalled that as Nelson and Winnie Mandela walked into the National Stadium in Jamaica, that was the song that was played on that day 30 years ago, and it also averted a potential showdown between the security forces and the people.

“When Mandela was at the stadium, a riot was about to break out because some people wanted to jump the fence to get into the already packed stadium, and the police were stopping it. They actually started throwing missiles at the police, and it was about to get ugly. Right in the nick of time, ‘Babsy’ Grange came up with a plan. She said, ‘Put Carlene on stage now’. We did, and Carlene started singing Welcome Home, Mr Mandela. Things quieted down, and everybody started singing along,” Cowan said.

That wasn’t the only song Cowan had written. While Mandela was in prison, he had written an inspirational tribute song titled Winnie Mandela for his wife to sing. When the Mandelas visited, Davis was among a select group of women who met with Winnie.

“It was a ‘wow’ moment for me. I was taken aback to know that I had lived to meet and see her and being able to touch the struggle. When I met her, we hugged, and I gave her a 12-inch vinyl copy of Winnie Mandela with a photo of her on it, and she was very gracious, she said songs like these inspired her and gave her strength to keep up the fight,” Davis is quoted in an online publication in 2018.

Cowan shared that after Winnie Mandela’s passing, on April 2, 2018, they were invited by the South African High Commission for a remembrance.