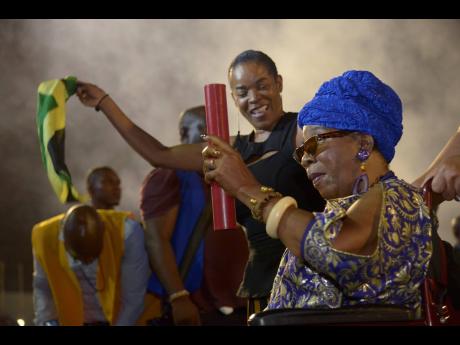 File
Rita Marley moments after receiving a citation from the Government for her contribution to music, during the August 2019 Grand Gala event. 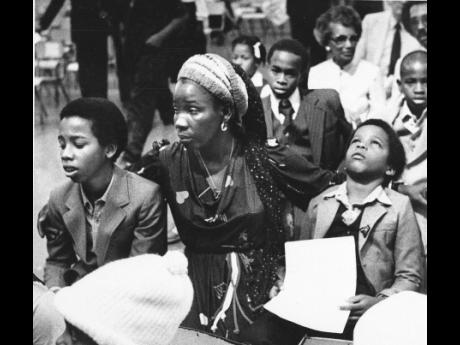 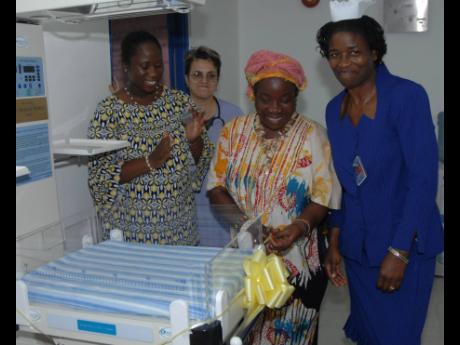 File
Novlin Leslie Little (left), deputy chief executive officer of the Victoria Jubilee Hospital, applauds as Rita Marley cuts the ribbon on a baby warmer that was donated to the hospital by Unlimited Resources Giving Enlightening (URGE) of the Marley Foundation. The foundation donated some 12 cots and a baby warmer to the hospital valued at just over $1 million. Looking on are Valerie Taylor-Smalling (right), director, nursing services and Dr Liana Hernandez. 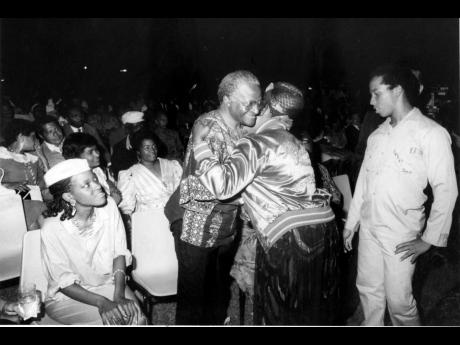 File
Rita Marley gives a warm welcome to the South African cleric Desmond Tutu when she met him at the cultural concert held in his honour in 1986. At right is her son Ziggy Marley, and, at left, Mpho, the daughter of Tutu.
1
2
3
4

A diamond jubilee comes around after 75 years, and today, Dr Rita Marley is shining like a diamond as she celebrates her 75th birthday. Much has been written and said about Rita, the singer and songwriter, member of the I-Three, mother, grandmother, humanitarian, and widow of Bob Marley, and much more will be said today as family, friends, and fans show their love for the Lioness of Reggae.

But what exactly does Dr Alferita Constantia Marley, who gave the world classics such as Who Feels It Knows It, One Draw, Harambe, A Jah Jah, Good Morning Jah, wish for on her birthday? Cedella Marley, Rita’s daughter, shared her mother’s words. “To see the unification of all people regardless of colour, gender, or race. We have to move forward, not backward … . I don’t want my grandchildren and great-grandchildren to grow up in a world full of conflicts and racism.”

A new half-hour documentary brings to life the acclaimed ‘Nana’, a woman with high ideals, reaching for the stars with her feet firmly planted on the ground. Persons from all areas of the music industry share their thoughts on Mrs Marley, or Sis Rita as they call her, and relate candid stories about her personal influence on their own lives.

Supe producer Clive Hunt reflects on Rita Marley, the record company executive “and the real executive producer”. Hunt points out that regardless of her position at the world-renowned Tuff Gong studios, the CEO didn’t ever think she was too big to sing back-up.

“There is something I really like about her, which would really make me feel good. Whenever she comes to the studio and see me working on certain projects, she would say, ‘Mr Hunt, can I sing back-up vocals?’ And I would think she is joking, and I seh, ‘Ah, Mrs Marley’. But afterwards, she would send a message to me to remind me that she would like to sing. And a few times, that happened. If I am working on a project at Tuff Gong, she wants to be involved. We did Alpha Blondy and Chaka Khan, and she was very involved creatively,” Hunt reminisced.

Saxophonist extraordinaire Dean Fraser, a little warily, shared the nickname Rita Marley has for him. “Mrs Marley call me ‘Deanie Weanie’. When is time to put the set together, she would seh, ‘Come, sister Marcia, Deanie Weanie will put it together.’ I don’t know why. That was just her name,” he told interviewer Carlette DeLeon.

A special memory for Fraser was “a mind-blowing concert” at the renowned Hollywood Bowl in California. “We did a great Bob Marley set, and it was just fantastic. It was as if we didn’t want to stop,” he recalled.

Singer Carlene Davis focused on Rita Marley’s strength, while Julia Vaz, who worked at Tuff Gong for years, paid tribute to the Marley matriarch as the force that made Bob Marley the force that he remains to this day.

“Having lost her husband at such an early age, and she was able to carry on and embrace all his children and keep his legacy alive. She also had her career and was able to put that aside and focus on the development of the foundation and get lawyers to put that in place. We would see each other backstage or at Tuff Gong Studio, and we have had a lot of time to chit-chat about the industry. It is helping me today, where I sit as the wife of Tommy Cowan and his legacy,” Davis pointed out.

According to Vaz, “If Rita didn’t do the work that she did, then I don’t think we would have the kind of Bob Marley legacy that we have today. And that is not to say that he was not a great artiste.”

She lauded Rita for “embracing everyone who worked at Tuff Gong”.

Vaz added, “She knows how to inspire and makes you want to give your best every time.”

Rosemary Duncan spoke about the work of the foundations. Rita Marley is the founder and chairperson of the Robert Marley Foundation, Bob Marley Trust, and the Bob Marley Group of Companies. She adopted 35 children in Ethiopia and has assisted over 200 children in the Konkonuru Methodist School in Ghana.

Long-time friend and confidante Grub Cooper, of Fab 5 Band, shared insights into Rita, the mother. “When they started to sing, she kind of kept a tight rein on them. She wanted them to have the education till they reached a point where they could do it all for themselves and make their own decisions. I remember one time she told me that when Ziggy was going to George’s and he started to [grow] locks, and she would pull it out at nights, and Zigg would ask her why. She told him, ‘No, man. You still going school, so conform to the rules, and afterwards, you can do what you want.’ She was a great mom, and she was a mother to all of Bob’s children,” Grub said.

Daughter Stephanie agreed and also spoke of her mother’s wisdom. “When dad passed on, then she had to stand up like the lioness that she is [because of] the impact of what was going on and who daddy was. She was the disciplinarian. Dad would say, ‘Rita deal with her or him deh.’ I feel there was always a community. If she was not there, there was always a nurturer in the house. She was wise,” a poised Stephanie said.

The quality that she admires most about her mother is endearing. “It’s just the way she loves others, just effortlessly. Mummy’s steps are mummy’s steps, and you would have to be brave to try and walk in those steps,” Stephanie declared.

As Rita Marley marks her 75th birthday today, July 25, The Sunday Gleaner presents the final story in the special two-part exclusive looking at the woman behind the Marley family – her early years and legacy.