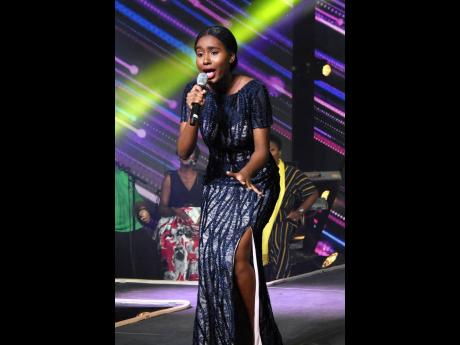 Contributed
Erica Lumsden performs at the final of the Gospel Star competition. 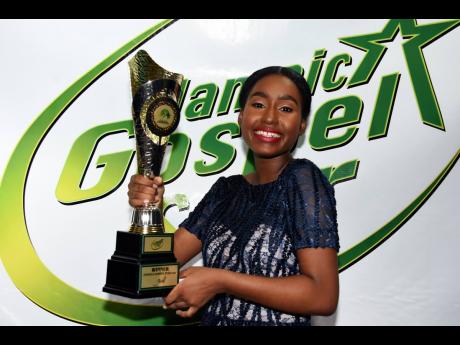 Contributed
The 18-year-old Gospel Star winner said she was happy to be able to put a smile on her father’s face.
1
2

Eighteen-year-old Gospel Star winner, Erica Lumsden, is happy that she could put a smile on her father’s face. Her dad, a Seventh-day Adventist pastor, always told her that he was her biggest cheerleader, and despite suffering a stroke last year April, he still guides her along.

“These days, my father just stays in bed, and it was nice to see him getting excited over me being in the competition and watching the shows on TV each week. He couldn’t come to the final show, but my mother and sister set up the TV for him to watch it, and they left home near the end to come and pick me up. Unfortunately, the car broke down twice on our way home, so when we finally reached home, he was asleep, but we were noisy. When he woke up, he had the brightest smile. He is happy, and I still think he is my biggest cheerleader,” Lumsden said.

A student at Northern Caribbean University in Mandeville and a member of the on-campus singing group Shahaye, the first winner of the rebranded Gospel Star competition aims to continue her father’s legacy through her music ministry.

“The one thing I want to do more than anything else in this world is sing. Music drives me to get up in the mornings; it is a part of who I am. I want to share my talent with the world and win souls. This competition launched the career of Kevin Downswell, who now has his own ministry and is doing very well, so this is a good place to start,” the newly minted millionaire who doesn’t think she is a millionaire said.

“I don’t think one million really qualifies you as a millionaire,” she said with a laugh and added that she will be investing her prize money in her career, but first, she will be completing her communications degree.

Reflecting on her win last Sunday night, Lumsden said she was “still processing everything”. According to her, all five finalists were powerhouse singers, and she felt that the votes would make the difference. The winner was decided by 50 per cent votes and a panel of judges.

“Winning is like being in a dream, and I still haven’t woken up. My mother, who has been my chauffeur, said she has never screamed so much in her life, and she said my sister, Evie, just couldn’t stop screaming. It has been non-stop congratulations; my choir members said they banged pot covers when [they] heard. I really didn’t expect it, and I am grateful, especially because I couldn’t sing at first, and when I was nine, I prayed to God for the talent because my sister could sing, and I wanted to be like her. My father baptised me at the church in Claremont, and a few weeks later, I started singing,” the Gospel Star said.

Lumsden is looking forward to performing at the Police Officers Club on Saturday at 658 FEST, a mega gospel concert being staged by Kevin Downswell Ministries and Clearsound Production Services.