Churches amplify the use of reggae music for emancipation 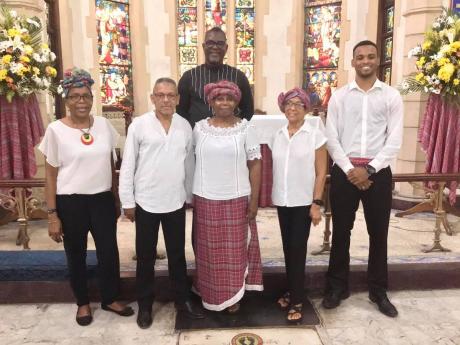 In Jamaica, in the early 1800s, the church played an important role in the dismantling of slavery. The Baptist missionaries, in particular, were vocal about their disgust for this evil system. So on Sunday, it came as no surprise that churches across the island were jubilant in their celebration of emancipation and the freedoms it brought to the island. What surprised outsiders looking in through church windows online was the amplified use of reggae music by traditional churches to tell the story of emancipation. Bob Marley’s Redemption Song was the anthem and a common thread regardless of the denomination in nearly every church visited. And praise and worship teams at many churches literally pulled out all the stops, on the organs and otherwise, to ensure that the celebration was indigenous and that both the music and the messaging were unmistakably Jamaican and clearly understood by congregations islandwide.

National Hero Sam Sharpe, who instigated the Christmas Rebellion in 1831, was a slave and Baptist preacher, and at Bethel Baptist Church in Half-Way Tree, the Emancipation Day service began with a rendition of Redemption Song by Alison and Daniel Golding on trumpet and guitar, respectively. After a spitfire sermon by Reverend Stephen Henry of the Jamaica Baptist Union, in which he suggested that some Jamaicans are living in exile at home, the rousing musical selections included Rivers of Babylon (Melodians), Book of Rules (Heptones), and Lord Give Me Strength (Luciano), backed by the Bethel Steel Orchestra.

“It’s not that we abandon our regular hymns, for as you see, we used the traditional favourite Dear Lord and Father of Mankind on Sunday, but for special services like Emancipation, we amplify the Jamaicanness of the service,” one worshipper told The Gleaner. “The worship service will mirror the society, which is a combination of the love for past and present, hence this exciting fusion of music,” Genevieve Stewart, a deacon at the Linstead Baptist Church, added. The spirit of the celebration was similar at Calvary Baptist Church in Montego Bay, where the service jumped off with the sprightly Jamaican composition Enter into Jerusalem, written by Catholic priest Father Richard Ho Lung. In the sanctuary at Webster Memorial United Church, Alison Roberts’ moving performance of Marley’s Redemption Song and Noel Dexter’s O Praise Ye The Lord alongside the riveting sermon by Reverend Astor Carlyle would have melted the heart of even the cruellest slave owner.

At the Cathedral of St Jago de la Vega in Spanish Town, Peter Tosh’s Jah is My Keeper reverberated throughout the high ceilings of the 19th-century Anglican edifice, sung by the choir. And at the Swallowfield Chapel Emancipation Service, church official Rochelle Duncan greeted those visiting with a warm Jamaican welcome, “Mi glad fi see unnu you see”, followed by a medley of local music driven by a vibrant reggae band and an easy skanking vocal trio.

“The Emancipation Day service at St Mark’s in Brown’s Town was awesome,” a retired church organist who played for some 50 years, Norma Walters, stated. “It began with the sound of the abeng followed by a drum roll. The procession of clergy and servers was accompanied by a medley of Bob Marley’s classics, Redemption Song and War. And we lit candles in memory of the slaves who lost their lives or who were tortured in the Christmas rebellion of 1831 to 1832, acknowledging each by name.” Walters added.

Back in Half-Way Tree, at St Andrew Parish Church, the celebration was reggae to the core. Pretty much the entire service utilised Jamaican music, with the Eucharist administered against a backdrop of Marley’s Redemption Song enriched by piano, conga drums, violin, and bass guitar. “Typically, the music is more culturally aligned on Emancipation Day when there is a heightened level of identification with black people and black culture,” music director for St Andrew and arranger Audley Davidson told The Gleaner. “The Emancipation Day hymns reinforce the liturgical themes of identity, pride, freedom, courage, and resilience. So you’ll find the incorporation of artistes such as Mark Myrie (Buju Banton’s) version of the Lord’s Prayer, Wayne Marshall’s Lord I Pray, and Peter Tosh’s Jah is My Keeper included in church services across Jamaica. Reggae songs like these connect the Jamaican soul to Massa God, and there are churches that further intensify the Jamaican experience by reading from the Jameikan Nyuu Testament Bible”, he revealed.

Dave Rodney programs music for the Facebook page, Church music from around the world. diademata@aol.com