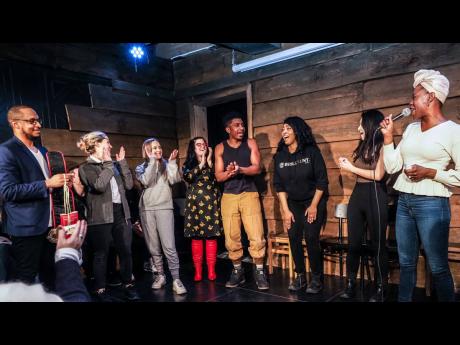 The organisers of Canada Monologue Slam, one of North America’s largest acting showcase, have decided that after 10 years, the platform is more than ready to feature an even wider scope of talent. It has embarked on the Jamaica Actors Monologue Slam (JAMS) by partnering with the Jamaica Film and Television Association (JAFTA) and received entries from approximately 60 of the island’s diverse talents. According to Andre Newell, co-founder of Canada Monologue Slam, there is a need for platforms that engage, educate and expose Jamaica’s talent on a broader scale.

“Traditionally, we see theatrical-based acting in the workshops I have participated in Jamaica, but the actors have consistently showed interest in television-type acting, is a different skill set. So, I thought if the actors had an opportunity to study that style and had access to a more stable platform, it could only do good,” he said.

Newell added, “As a born Jamaican, my heart is always back home and every chance that I get, I return. I am very involved in the community there as I am here, and when I get to interact with the local theatre scene, I am always blown away by the talent and passion of our Jamaican actors.”

For JAMS, the actors were required to submit a monologue to showcase their talent, with an opportunity to advance their education and development. And with the platform transitioning to online during the pandemic, more actors were aware. The top 20 shortlist of actors which was revealed in March had the likes of Kadeem Kenzic Wilson, who had a role in Sprinter, seasoned actresses Noelle Kerr and Stephanie Hazel, as well as popular dancer Tara Price and singer Aisha Davis.

“Even though we are based in North America, Canada is not as competitive as the United States, and the Monologue Slam has transformed the landscape of Toronto’s acting industry; and I said to my cousin and co-founder Olunike Adeliyi, if we could do that here, we could do it for Jamaica, as well as give local talent an outlet for expression. When we were doing the workshop, we saw that it really meant a lot to the different talents to express themselves through the art. It was impactful, emotionally and mentally, and it was encouraging for us to bring it to everybody,” the co-founder said.

The award for the winner included mentorship and training sessions with industry experts, as well as the opportunity to be signed with North American talent agencies. Each creative worked equally hard and participated in online workshops and for their determination alone, Canada Monologue Slam is “interested 100 per cent” to have more editions with Jamaican talent, Newell said.

“The winner, Noelle Kerr, definitely deserved to win and regardless of the judging, there are many persons who may not have made it to the finals that I thought were incredible, and our platform can only benefit from seeing them again, so many of them were brilliant. The Monologue Slam we do in Toronto is done monthly, because I am not one to believe in doing things infrequently, [so] I do want to find a way to get JAMS to a monthly or consistent basis.”

Canada Monologue Slam has come a far way, first starting as a church programme that encouraged youth involvement and exposure to the performing arts. A year after, it was launched in the city of Toronto, then Vancouver, Montreal and Ottawa, and welcomed actors as well as industrial professionals. Now it has pivoted to online, moving from showcasing 12 actors on a live show to 500 creatives at one time in the digital space. Newell, who was born in Kingston but raised in Brown’s Town, St Ann, expressed that the film, theatre and television industry is ever-changing and the energy contrasts across the cultural, but one thing remains important, it “is that the talent must stay ready because if you stay ready, you never have to get ready”.

“It simply means working on your craft, studying and practising so that you are always ready, because you never know when an opportunity will come up. The content in the theatre landscape comes from everywhere in the world, and the key for Jamaican actors is to be ready, because we are already wonderful storytellers. But it is about getting the acting up to international standard, and by being involved in the community and supporting one another, we can get there because it is not an individual sport,” Newell said.