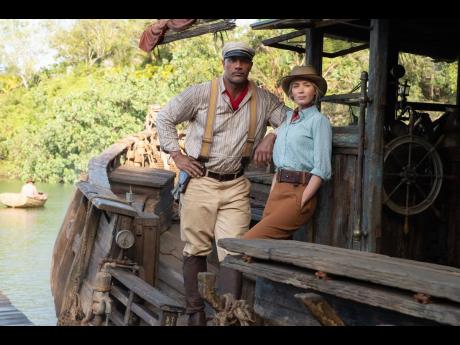 Contributed
Dwayne Johnson as Frank and Emily Blunt as Lily in ‘Jungle Cruise’.

There’s a moment in Jungle Cruise in which cruise captain Frank single-handedly wrestles a hungry cheetah and wins. The movie has an explanation for why this impossible thing occurs, and for the most part, it’s acceptable, but it was not lost on me that no such explanation was necessary. When it comes to Dwayne Johnson, we are more than willing to accept impossible acts of heroism. Jungle Cruise is the film that takes that reality and pushes it to the very limit.

Throughout this movie, the three heroes at the centre of it face all the threats the jungle has to offer – poisonous plants, headhunters, wild animals, and if that wasn’t enough, a group of cursed conquistadors with more magic abilities than the Hogwarts alumni. It’s a setting that makes for some thrilling moments, though not exactly dreadful.

Nothing in Jungle Cruise ever feels like it will bring our heroes to their end, yet the film finds a way to keep you entertained regardless. Partly because of how well the cast works with each other. Emily Blunt, Jack Whitehall, and Dwayne Johnson are a charming trio, and their characters are likeable. Especially Johnson, whose role is that of a real-life theme park attendant, complete with the kind of bad jokes you’d expect from someone who has gone on the same dull cruise too many times.

Dull is the only thing Jungle Cruise isn’t. It’s light-hearted and gives the sensation of being on the ride the film is based on. It takes cues from better franchises like Indiana Jones and Pirates of the Caribbean and puts them together to make something that’s not quite original but not a blatant copy. The story is simple and keeps you immersed in the adventure, and gives you exactly what you’d expect: a fun action adventure with some eye-catching visuals.