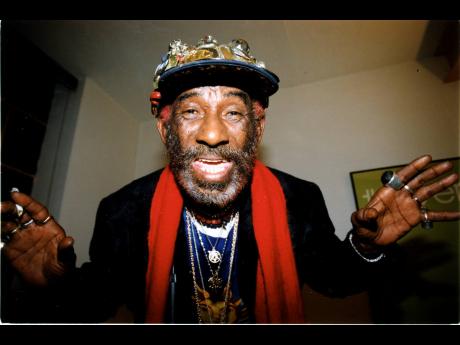 Voice Photo
Lee ‘Scratch’ Perry was a complex and some would say, eccentric legend. 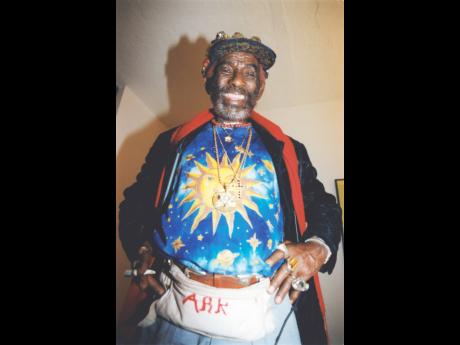 Voice Photo
‘I am sure that the reggae music is Lee ‘Scratch’ Perry music,’ Perry told Chaos in a 2013 interview. 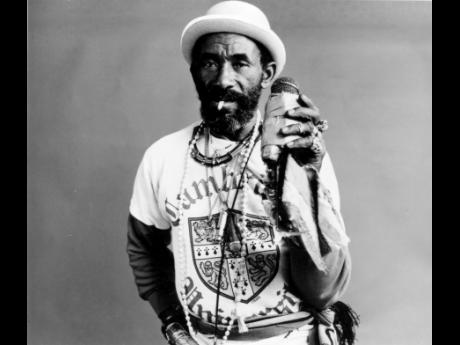 Voice Photo
The 85-year-old Lee ‘Scratch’ Perry, an integral figure in the success of dub music, died on Sunday mornig at the Noel Holmes Hospital in Lucea, Hanover.
1
2
3

(In January 2003, Sunday Gleaner writer Chaos conducted a two-part interview with Lee ‘Scratch’ Perry, one of the nominees for the Reggae Grammy Award. This is a repeat of Part 2. Part 1 was published yesterday.)

What is your take on dancehall nowadays as opposed to roots reggae?

Dancehall reggae, it reach it total destruction, it should park, and something different for the future of the children to educate their brain.

Everyting start from there, but after the guy getting more, him getting richer, him getting more greedier and the other one ‘round di corner sey ‘Wey yuh getting so much money?’ ’Im sey, if yuh don’t tell mi, mi wi kill yuh yuh kno’ and yuh get no more money, so ’im haffi tell ’im and bring in di rest a di pirate pon di boss. Dats why some a dem gwaan soon haffi come out a America, nuh tink dem a go be inna America much longer... haffi go fin’ someway else go. And Jamaica nuh anywhere fi put neida, ’cause Jamaica is a well God-blessed country and want to get rid of the Taliban and the rebels bad. So that American people can fin’ somewhere to live in a better country. Since Bob Marley is probably the only person who has had a ‘straight’ reggae sound internationally... They should arrest Bob Marley family. He arrange it to kill the sheriff here, and shoot the deputy and afta he make that song ... Jamaica mash up. He really did it. And it said men were going to die, don’t ask him why, and ’im come back as Damian Marley, ’im son, the reincarnation. Wonder what ’im have for us next?

So you also believe that Bob Marley personally helped to destroy Jamaica with that song or those songs?

If he didn’t make that, Jamaica wouldn’t mash up. Words are powerful, words have meaning.

Wasn’t politics causing all of that long before Bob Marley?

Even the god that he serve is evil, name Gad. Fi him god name Gad ... Fi ’im god give AIDS ... ’im [god] give Dennis AIDS... to distribute here too. They are terrorists.

Then what about the t’ret after the evil tings dat is going on, look how Jamaica nuh have no more economic ... the politician want to take over the reggae music, because Bob bill it out to dem. Chris Blackwell, the third richest man in the world ... when yuh nuh have no poor friend ... . (laughs) If it wasn’t for Blackwell, would reggae music have gotten to where ... (nodding long before the question was finished). People would recognise it sooner or later, but he grab it first. He is a first-grabber, ... is your blood mek ’im fat. Is not Mr Blackwell anymore, is ’Mr Fatwell’. Is not ’Mr Fatwell’ more, is ’Mr Rotwell’, ’Mr Fatwell, Batwell or Not Well’. I’m sure he is not well to be so fat. (laughs) If Mr Batwell had not recognised it somebody else would. Mr Rockwell would. Interesting.

What is your take on the nowadays trend, where for Jamaican music to make it abroad you have to do crossovers?

Show business is the top from ever since. There is no business like show business – Frank Sinatra know that.

Have you listened to Alpha Blondy, the African who has been nominated (for the Reggae Grammy Award)?

Do you think he deserves it (the nomination)?

Hmmm... if he don’t go so much into the ’yard’ business he could be a top star, if he want to be a ‘yard’ man he gonna end up as a devil or a rebel. You must be an international star, don’t be biased. If the people a yard love this, try to love somebody else; don’t try to love what everybody love, you will be too common.

So in this case, when you say ’yard’ you mean Jamaica?

Yeah, he want to be a yardie. He have a very sweet voice and he want to be like a Jamaican. Wonder if he know Jamaicans are the number one hooligans in the worl’? He don’t know that ... they rob me, so me can sey anyting, mi nuh have anyting good fi say ’bout dem ... mi not living as no human being... animal rights, not human rights. Bird laws, jungle laws and seabed laws me a defen’. Angels. We came here as angels an’ some tun cannibal afta dem eat too much meat, not angel anymore, Bob responsible fi dem, and Mr. Rockwell.

In that case, another thing. Another nominee – Capleton, fire, Rastafari ... .

So you don’t want to talk about ’fire’.

You have a reputation, apparently deserved, for being somewhat...eccentric, shall we say?

So what would you say to the people who say you are strange?

I am strange (smiling), of course. I am strange. I am Dr Strange. I see hypocrites ... I cannot say an evil man is good. When you evil, you are evil; and when you are good, you are good. And good is over evil, so is how good is the god, which is the truth.

One couldn’t help but notice that when you were setting up, you put up your flag and you put a mirror on the ground. Why the mirror?

The earth is the Lord’s. He show us our face from downstairs, People see it up there and they thought it come from upstairs. Is just a camera up there ... and he showing you the screen from the seven sea. God is Neptune and god world is under the sea. So people tink dey are living dere (pointing upwards) he just pull dem down and sey, ’Yuh up too long. You are too rich and you shouldn’t be rich. Come back down and take six foot six.’ I tell the people why you died, a lie you lie because the result of sin is death and the gift of God is eternal life. So the people who die is sin dem sin mek dem die.

So ... the mirror serves the same purpose?

That’s my wife dat. Dat is my wife dat dey don’ like. My wife was black an’ she went into black heart and steal all my tings wid black magic power, an’ I change my wife to white and dey don’ like har.

So where is your wife now?

She’s in Switzerland. She is speaking to me under there, she is a witch, a very good witch (laughs).

So what’s her name? Mary/Mirri?

She’s a Sagittarius angel. My son is Gabriel, the archangel; my daughter is Shiva, the goddess of India.

OK. Explain the CDs, the mirrors, the medals, the emblems... everything that makes up your ...

Emperor Selassie is my brain, my brain cell ... and if you want to find out who Jesus Christ...is Marcus Garvey. Without Marcus Garvey, nobody exist. So if you’re looking for any Christ, is Marcus Garvey here (tapping his chest directly above his heart). And ask him how min mek dis ting, dis is your engine, this is you car, this is your computer (another hoarse chuckle).

Do you plan on being at the Grammy Awards come February 23?

If you are there and you do win, what do think you will say?

What will I say? When I’m going anywhere I don’t know what to sey... . When I open my mouth the words fly out like lightning, greased tongue, fire must be on my tongue, I think. I think I am blessed with fire on my tongue. I never know what I’m going to say till I start AAAHHH!!!! When somebody get hurt, sometime I can’t help it ’cause sometime when I open my lip and I hear the tings, I even frighten, but I just have to laugh; but I can’t take it back, is already gaan, is not a slip of the tongue. Is a miracle.

On that note, I had asked you earlier, you also have a reputation for being booked for events, say, and you might go and you might turn away, or you might drop your pants — why?

Well, one time people were trying to know about life and they looking for God (in) outer space. I was trying to show people that what makes you, everything is in the body, nature’s grace. If you see yourself, you could perform the performance of Jesus Christ, if you are true. If yuh woman love you an’ you making love to her in bed, you could give her a nice sex an’ say ’Jesus Christ’, because it’s coming from the cock. People hear that an’ misunderstand ... they didn’t ready for me. Just showing them the nature, about the elements, an’ the moment ... that you can say ’Jesus Christ’ an’ Jesus Christ appear. Just showing dem everyting stripped down.

My contribution to Jamaican music is, ummm, the music wouldn’t reach anyting to anyting like it reach now... . I am sure that the reggae music is Lee ‘Scratch’ Perry music. And I am sure that this music wasn’t written here in Jamaica. It was written in London, England, Great Britain. Having a party, hope you are hearty, don’t be naughty, it will be a punky reggae party. I didn’t say it going be a Rasta reggae or a dread reggae party, it wasn’t written here ... when I have my white punk friends in England, we say it’s gonna, it gonna be a punky reggae party, so Mr Blackwell rob us and take away our Punky Reggae Party.

You worked with The Clash and so on, right?

That was my contribution not even to Jamaica, to the universe, Punky Reggae Party.

As you have implied, Bob Marley did a version of that song, how did you feel about that?

Well, I write it, an’ for him to sing it; it was kinda like a gift like. So at that point in time he wasn’t the ’devil’ per se? When you not big yuh know is OK, but when you get big an’ man can tempt you easy, you can be God today and devil tomorrow, lead to temptation. Today you a God an’ everting alright because yuh nuh have the rich, because everyting rich is the devil, nuh so it go?

So what have you been doing over the past few years in terms of reggae?

Show business. Mi already do wha mi have to do in the reggae business, mi nuh have anyting more fi do wid it, mi nuh want to be a part of it, mi nuh waan to be in competition wid it... mi have mek it holy, mek it righteous, take it out of dancehall, mek it spritual, soulful. I’ve done enough ... all I do now is show business.

Do you see reggae music going any further?

One last question, do you want to win the Grammy Award?

(With a smile) If they give it to me I will accept it gladly, wouldn’t I?