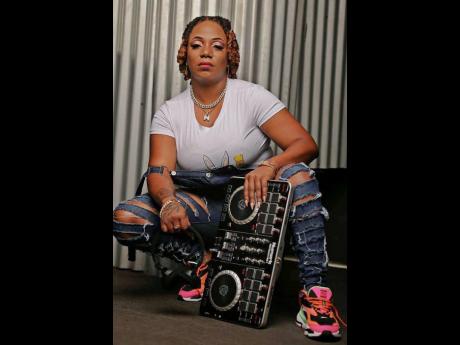 For more than a decade, DJ Naz Gurlpower has observed patrons erupting with excitement at the sound of other people’s music, and now she’s on the receiving end of gun salutes and ‘money pull-ups’ because of her song Mad Gyal.

Consecrating JimmyQ’s Crypto rhythm with the flickers of her lighter, an isolated DJ Naz meditates in her car in the company of her spliff. With a catchy “haha” here and there, she recalls the criticisms of others on how she lives her life, but sings that there’s no stopping this “mad gyal”, as she walks to the tune of her own beat.

“A whole heap a people love the song, and dem reach out,” DJ Naz told The Gleaner. “Mi play it at couple parties, mi do the likkle promotions and ting, and people a seh the song bad, it short and spicy. Mi have a video fi do fi it now, so that’s what I’m working on … . Mi just waan dah song yah buss out big, big. Mi waan the big doors dem open, that’s the whole plan.”

Though the single premiered late last month, it was written in July, ahead of her historic win at the 13th annual Guinness Sounds of Greatness (GSOG) competition.

“I was just vibing to the rhythm one day, and the song came about,” she said. “It’s the first time I wrote a song for myself, and I sent the track to my brother (producer-artiste) Ikan Daki, and he mixed it for me. We sent it to JimmyQ, and he liked it, and we just took it from there. When I was gearing up for the winning and all the excitement for GSOG, I remember telling the producer that we need the video now to release this.”

But like her recording journey, nothing comes before its time. The daughter of reggae songstress Joy White and Bob Marley’s former manager Don Taylor, DJ Naz has been making studio runs since she was in pampers. After years of concretising her name as a turntable goddess, she made her official recording début in 2017 with her Naz Nation Records-produced Talk The Truth. The dancehall number was a ‘side-chick’ flex which showcased her singing skills. It has since found favour in the sound clash space as a popular dubplate.

“I’ve been aspiring after music for a while; it’s just that Talk The Truth was the first official production that actually came out,” she said. “Before that, I did a demo single, and back in the day, we usually go studio and voice whole heap ah rhythms. I remember one time my mom took me to (producer) Donovan Germain, and he wanted me to sing, but I used to venture into rapping ‘cause my favourite artistes at that time were people like The Fugees, Missy Elliott, Timbaland, Magoo and Aaliyah.”

But breaking into this side of music has not been easy. DJ Naz faces the common challenge of being unsupported for any ‘alien’ endeavour.

“Mi just tell myself seh mi a gwaan do mi thing same way. The normal selectors shub out the most, but the ones dem weh yuh smile and laugh wid and, you’d seh, unno deh pon a level where dem woulda give you the strength, ignore … . When a my time, a my time. Nobody cya stop that and from the fans dem love yuh, and yuh have the supporters, a just deh so it deh.”

With her two primary releases centring side chicks and marijuana meditations, DJ Naz said she feels some pressure from folks who believe her growing catalogue should mirror her mother’s style of music ( First Cut is the Deepest, Dread Out De), and then some. Though she intends to remake one of her mother’s songs one day, she reiterated her autonomy.

“Sometimes people be like, ‘Oh, you have to do only positive stuff,’ but you have to just do what you can relate to,” she said. “Mi nuh waan write bare something ‘bout tek man and dem likkle one-two-three something deh – that’s not really my thing … . My style is a vibes. We just put out weh we get in terms of weh we feel from the rhythm.”