Fire leaves $300,000 worth of damage at Wailer’s childhood home 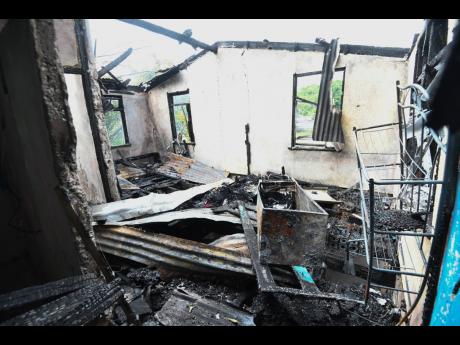 Ricardo Makyn
The childhood home of Bunny Wailer and Bob Marley on Second Street in Trench Town, St Andrew was destroyed by fire on Saturday morning. Damages are said to total $300,000.

Saturday’s fire at the childhood home of reggae pioneer Bunny Wailer caused an estimated $300,000 worth of damage, Emeleo Ebanks, public relations officer at the Jamaica Fire Brigade, told The Gleaner.

The house on Second Street in Trench Town, St Andrew, caught fire on Saturday morning. The cause is unknown and currently under investigation.

Yvette Gordon, a 47-year-old occupant of the home, told THE STAR in an interview that tourists often marvelled at visiting the former home of Bob Marley despite it being in a state of disrepair.

“A lot of white people come, and they take pictures and all happy to be where the great Bob Marley grow up. Dem would go upstairs to where his room was. Sometimes we have more than a dozen tourists ina di yard,” she said. “His music is legendary, so it is a very good feeling to know that I am living somewhere where someone who is so iconic around the world once lived. When mi first understand I was like, ‘Yea, mi live ina di yard weh di real big man did live’.”

Minister of Culture, Gender, Entertainment and Sport Olivia Grange revealed that the Government has committed to restoring the boyhood home, which was declared a Protected Site by the Jamaica National Heritage Trust in 2018.

Grange said in a release that the two-storey house on Second Street “represents the space in which the creative genius of three Jamaican artistes put to music their sorrows, struggles, determination and messages of love, underpinned by Rastafari philosophy and the reggae beat”.

She added that the Jamaica National Heritage Trust would soon begin assessing the damage to restore the structure.