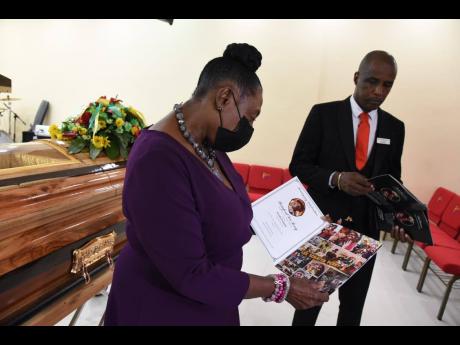 The funeral service for eccentric musical genius Lee 'Scratch' Perry is scheduled for today at 2 p.m. in his birth parish of Hanover.

Minister of Culture, Gender Entertainment and Sport Olivia Grange confirmed to The Gleaner that Perry's final resting place would be the family plot in Cauldron in the parish.

"There will be a brief viewing at Perry's Funeral Home from 8 – 9 a.m. before his remains are taken to Hanover for internment," Minister Grange shared.

His widow, Mireille, had earlier revealed that the legendary producer would be buried in Hanover, near to his mother, in keeping with his family's wishes.

Scratch Perry passed away on Saturday, August 28. He died on his way to the Noel Holmes Hospital in Lucea, Hanover, Mireille stated on social media recently, as she tried to clear up wrong information about his death. The cause of death has still not yet been revealed.

Lee 'Scratch' Perry's sudden death at age 85 years old made headlines globally, and fans have been demanding to know exactly how their idol died, especially in light of his widow's declaration, two days after his passing, that "Lee was not sick".

"Please also understand, everything in Jamaica takes longer, and I will come with more information as soon as it becomes possible," Mireille had promised.

Rainford Hugh Perry, also known as The Upsetter, was born on March 20, 1936, in Kendal, Hanover. The influential and prolific record producer and singer is known for his innovative studio techniques and production style. Perry was a pioneer in the 1970s development of dub music in Jamaica with his early adoption of remixing and studio effects to create new instrumental or vocal versions of existing reggae tracks.

A Grammy award winner, he worked with and produced for various artistes, including Bob Marley and the Wailers, Junior Murvin, The Congos, Max Romeo, Adrian Sherwood, Beastie Boys, Ari Up, The Clash and The Orb.

Keith Richard, co-founder, guitarist and vocalist of the supergroup Rolling Stones in a 2010 interview with Rolling Stone magazine, described Perry as "the Salvador Dali of music".

"He's a mystery. The world is his instrument. You just have to listen. More than a producer, he knows how to inspire the artiste's soul," he said.

In 2012, the Jamaican Government conferred Scratch Perry, The Upsetter, with the Order of Distinction for his contribution to reggae music.