Daniel Craig on bidding Bond goodbye in ‘No Time to Die’ 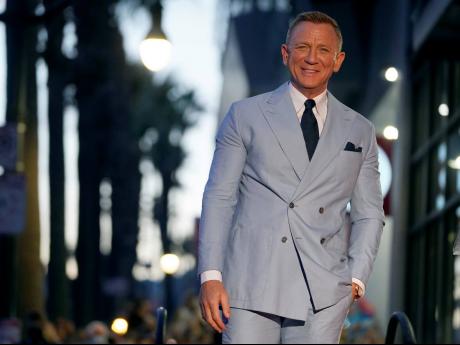 AP
Daniel Craig was far from the expected choice and never had any ambitions to play James Bond. But 15 years and five films later, the actor, once derisively labelled ‘Blond Bond’, turned out to be a smashing success and is celebrated for the ways in which he remade and emotionally deepened the once retrograde superspy. 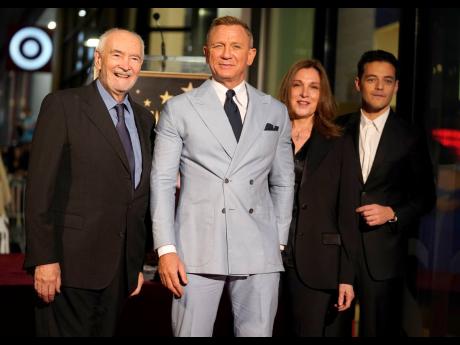 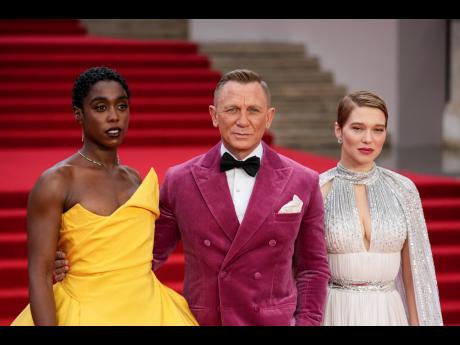 AP
Lashana Lynch (left), Daniel Craig and Lea Seydoux pose for photographers at the world première of ‘No Time To Die’, in London. 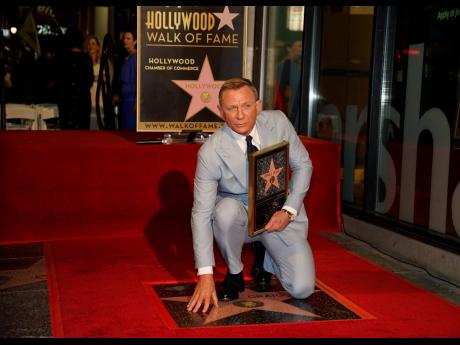 AP
Daniel Craig poses atop his new star on the Hollywood Walk of Fame while holding a replica of the star. 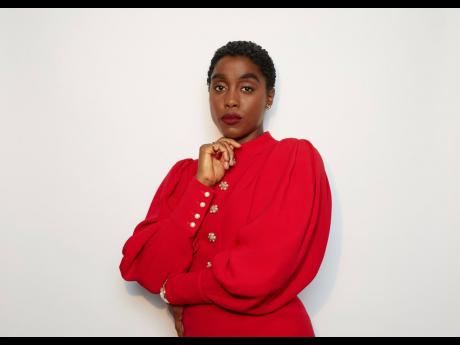 AP
British-Jamaican actress Lashana Lynch said she was only really gripped by James Bond when Daniel Craig took over in 2006’s ‘Casino Royale’. ‘For me as a black woman to be able to relate to this white man, that’s magic,’ she said.
1
2
3
4
5

When Daniel Craig first got the gig, he felt like something had gone amiss. “You’ve got the wrong guy,” he told the producers.

But Barbara Broccoli and Michael Wilson insisted. No, he was the one. He was James Bond.

Craig, then a rising performer but far from the expected choice, never had any ambitions to play James Bond. He had assumed he was being strung along as part of a massive casting machine, one of the dozens of actors screen-tested.

“Once I did find out, I was incredibly flattered and deeply confused,” Craig recalled in an interview. “I just felt like I wasn’t the right person.”

Fifteen years and five films later, Craig’s tenure as 007 is coming to a close. No Time to Die, which opened in the US and Jamaica on Friday after a 16-month delay due to the pandemic, is the last hurrah in Craig’s celebrated Bond era, a stewardship that saw Craig remake and emotionally deepen the once retrograde superspy — with more than US$3 billion in box office along the way. Once derisively labelled ‘Blond Bond’, Craig turned out to be a smashing success.

“It paid off in spades,” said Broccoli. “He’s truly remarkable. He’s reinvented it for the 21st century. He explored the inner-life of Bond.”

But would Craig have ever gone through with it had he known what he was in for?

“If I had known more, I don’t think I would have been able to do it. The less information I had back then, the better,” said Craig, speaking by Zoom from New York. “The rest of it, the weight of it, how huge it all really is – I didn’t know. I didn’t really understand.”

He pauses. “I don’t suppose I really understand it now, either,” Craig added. “I pretend to understand. That’s what getting older is all about. I pretend better than I did back then.”

No Time to Die, directed by Cary Joji Fukunaga, is, with certainty, Craig’s final turn in the tux. But it’s also a culmination of where Craig has been driving Bond. His 007 is a character, not an icon, capable of grief and regret, and far from bulletproof. That evolution takes centre stage in No Time to Die.

“I always just felt: How do these things affect him? Within a Bond world. Not in, like, a Hamlet way. But in a Bond world,” said Craig, who won’t play Hamlet but Macbeth — a play about the perils of ambition – on Broadway next year.

No Time to Die started off unsteadily with writer-director Danny Boyle departing over creative differences. Fukunaga stepped in, and the script was completely rewritten. That the film was even happening in the first place was, to some, surprising. After the previous entry, 2015’s Spectre, Craig had suggested he’d rather slit his wrists than make another. The physical toll of the films and the time commitment — “It’s a year,” he said of each film — was wearing on him.

“I’ve often been criticised as moaning about it,” said Craig, 53. “After Spectre I went: I don’t think I can do this any more. I got to a point where it was like: The risk feels too great. That phone call home where I phone up and say I’m injured, I’m in the hospital — it’s not a nice phone call to make, and it’s happened a lot over the years.”

He chuckles. “It happened on this as well, but there you go.”

During filming in Jamaica, Craig slipped while running on a wet dock and badly injured his ankle. The film-makers could hardly know then that temporarily losing their star would just be one of many headaches to come. Before the pandemic arrived, No Time to Die was slated to open in April 2020. Television ads ran. Craig hosted Saturday Night Live. The film’s theme, by Billie Eilish, was released and won a Grammy months before the film’s London première.

No Time to Die arrives at a crucial juncture for the movie business. Lately, some ticket sales have been reaching pre-pandemic levels. Bond is poised not just to save the world one more time, but also to give movie theatres a lift while he’s at it. Sales in the UK over the weekend were on par with the opening for 2012’s Skyfall, which cleared US$1.1 billion at the box office.

Change, though, is everywhere. In May, Amazon announced plans to acquire Bond’s home studio, MGM. With that came pledges that Bond films will always first be released in theatres.

“We’ve been told that by MGM and Amazon and take them at their word,” said Wilson. “Throughout the history of Bond, we have seen our studio sold out from under us many times. For 60 years, we’ve had countless different owners, and we’ve managed to stay making our films and keeping Bond going.”

But Craig’s departure may test the franchise more than any previous 007 changing of the guard since Sean Connery exited. During his five films, Craig has shaped the overall series as much as he has the character, bringing in top-class film-makers and raising the bar overall.

“I asked them straight out. I said: Listen, the confidence I need to play this role — one of the most confident people in movie history, if not the most confident human being in movie history — I need to be able to take part,” said Craig. “I need to be able to know what’s going on, to have an opinion, to feel like I have a voice. They just said yes, we want you to be involved.”

Expect to hear endless rumours and speculation of a successor to Craig for the next year. ( The Onion wryly reports Wallace Shawn is in the mix.) Broccoli and Wilson, though, say their current focus is on celebrating Craig’s swan song. They’ve set no parameters except to say that Bond is foundationally a male character.

“It’s not like we’re trying to be evasive,” said Broccoli. “We’re genuinely not at a point yet where we want to start thinking about where it could go. So, I think it is a clean slate. We could go anywhere with the character.”

Craig cares that the films remain relevant in the future. But he sounds almost gleeful that those concerns are no longer his.

“Thankfully, it’s not up to me anymore,” said Craig, smiling. “I will admire from afar.”

In the meantime, once-rigid power structures within the Bond world have been partly dismantled from the inside. In No Time to Die, Lea Seydoux returns as Madeleine Swann, the first time a Bond love interest — a so-called ‘Bond girl’ — has carried over between films. In the film, Swann and Bond’s relationship isn’t disposable. It’s central.

“I want everybody on screen to mean something, to have weight,” said Craig. “I’ve loved some of the characters in the past movies, and they have impact. But there’s a lot that’s quite forgettable because they were trained to be something or whatever. I just wanted everybody to be remembered, to deserve to be up there on the screen.”

Lashana Lynch also makes Bond history in No Time to Die as the first female 007. (Bond has left the service in the film, freeing up his code name.) Lynch, a British-Jamaican actor, was only really gripped by Bond when Craig took over in 2006’s Casino Royale.

“For me as a black woman to be able to relate to this white man, that’s magic,” said Lynch. “That’s the power that Daniel Craig has brought to the franchise, but also the power of the creators behind making sure they’re keeping the fans on board and inviting new fans to join in the fun.”

On a film set, the final shot in a day is nicknamed the martini. When it came time for Craig to film his last scene and wrap his 15 years as Bond, it was a rainy, cold late night on the back lot of Pinewood Studios.

But everyone on the crew — the producers, heads of department and actors — gathered to witness the occasion. Broccoli noted the fittingness of the scene — Craig running away from the camera, into the dark. As seen in a widely shared video clip, Craig was quite moved by the occasion as he spoke to the assembled crew. You might say he was shaken by the martini.

“The last day of filming is rarely a punch-in-the-air moment. It’s usually a hard slog at the end of the day. Everyone wants to go home,” said Craig. “I thought: ‘Oh s***. I have to make a speech.’”