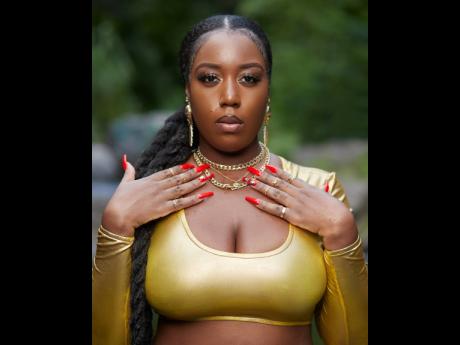 Marlon Mckoy
Yeza feels that ‘Kingdom’ is a song that is a reminder to still go out there, still try your best, still try to adapt to the times and move forward.

“I think a lot of people started to fold psychologically, physically even, during the pandemic,” Yeza tells The Gleaner. She includes herself in this lot, as she went off the grid for a couple of months while she sought to overcome a “low vibrational” period. The result of her self-work is a new project called Kingdom, and ultimately, an improved Yeza.

“For a hot minute, we didn’t know what was going to happen, if music was still going to be possible, and so on; and after the end of that deliberation, the decision was to have a kingdom attitude,” Yeza said.

“Kingdom, for me, is more of a state of mind and all the results that are possible from having this state of mind. Personally, the state of mind that is ideal for me is somebody who is fearless, somebody who’s gonna go and get what she feels she deserves, which is all the successes from her passion – my passion being music, writing and impacting the world through art and music in a very significant way. My kingdom is the manifestation of this reality, which I think is already happening now ... Kingdom is a song that is a reminder not to fold: still go for your dreams, still go out there, still try your best, still try to adapt to the times and move forward.”

Produced by DimKing Records and I Am Wav Music, Kingdom debuted in August and premiered with visuals three weeks ago. The video complements the song’s meaning, with Yeza presenting her best self in a myriad of vibrant, regal looks, while commanding her space and hustling to make the most of it. Her strides are supported by her community, literally, as the video was shot in her Eight Miles, Bull Bay hometown. Rayon Smith and Andre ‘Kryss Ras’ Barnes directed the visuals, but Yeza was also integral in the creative process.

“I actually put all the outfits together myself, and the salon scene was inspired by my previous profession as a hair stylist, which is also encouraging other people in dem creative field to just continue work, grind and build your kingdom,” she said. “I feel like Kingdom is significant to grassroots and starting from where you are, using what you have and making the best of it; and that’s the real reason why I feel like my community was the perfect place to shoot it.”

The reception to the project continues to grow with heavy support from the UK’s Seani B, Ras Kwame and Mixmaster J. Jamaica’s DJ Kurt Riley has also been rotating the song on his platform, likewise North America’s International Stars Radio.

“The feedback has been good so far and we’ve always had that organic support,” she said. “I have a small team; it’s just my manager and two close people who are helping out, and it’s been really rough because resources are short, but they’ve been sticking by me, and I just want to big them up.”

If you’ve yet haven’t checked out Kingdom, “It reminds you of your greatness and power, and you really need dem reminders deh right now, I don’t care who you are or what you’re doing.”