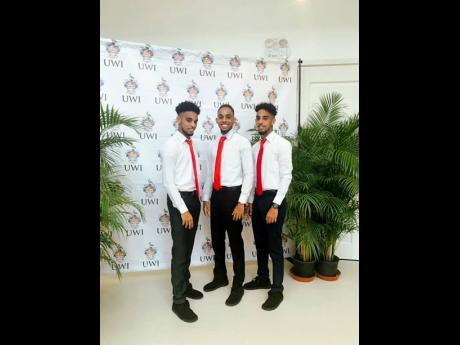 Strict COVID measures were in place at this year's graduation photo sessions at The University of the West Indies (UWI), Mona, disallowing extra company, including close family and friends. But for 22-year-old David-Asher, Jon-Michael and Marc-Anthony Davis, they were able to share the experience and milestone together as a family and best friends because they are triplets.

“I am very pleased with this feat, and I'm very grateful and thankful to my parents who made sure that I was able to get an education,” David-Asher told The Gleaner. “It's an amazing feeling to have completed this degree, especially alongside my brothers.”

His pursuit of political science was inspired by his love for reading and writing and his desire to use those skills to become a transformational leader. He sees himself pursuing a graduate programme in the future in human resources management or public administration.

David-Asher is also interested in changing the local political landscape, which he labelled partisan.

“I would like to charge the current Government as well as the Opposition to create forums for which the Jamaican people can learn about civics from an early age, whether it be through the education system or through mainstream media, to help our citizens become more aware so that we may change and move away from the political culture of clientelism and patronage,” he explained.

Since he was a teen, becoming a surgeon has been Marc-Anthony's dream, and he accepted an offer to pursue the BBMS after his application for the bachelor of medicine-bachelor of surgery programme was rejected.

He has since reapplied and been accepted following the completion of his first degree.

DELAYED BUT NOT DENIED

“It just goes to show that I was only delayed but not denied in the plans that God has for my life,” Marc-Anthony said. “I am also thankful that I was able to gain a sponsored place, which requires me to only pay 20 per cent, which is still about $670,000 of the very expensive tuition, but I'm grateful. With that said, I'm on the way to becoming Dr Marc-Anthony Davis.”

He wants to help other aspiring medical doctors to get there, too. Marc-Anthony is encouraging people to financially assist medical students who want to serve their nation but face high fees.

“This year, the tuition was raised and now sits at a whopping $4.3m per year,” he said. “The tenure of the MBBS (bachelor of medicine and bachelor of surgery) programme is five years, and to rub salt in the wounds, the 50 per cent subsidy that Jamaican students could normally apply for has been cancelled, albeit in a pandemic… If there's anyone out there that's willing to even assist at least one student of my year group, excluding myself, that would be greatly appreciated.”

For Jon-Michael, his ambitions weren't as clear as his brothers'. He dabbled in engineering, tourism management and computer science, until he found something that genuinely piqued his interest.

“Growing up, I always loved mathematics, but what truly inspired me to transition to accounting is when I got a taste of the accounting courses at UWI in my first year,” said Jon-Michael. “I had no prior knowledge of accounting from high school, as I did no business subjects or accounting subjects because I told myself I wanted to be an engineer.”

He is now on the road to pursuing his ACCA qualification to become a chartered accountant.

While their career goals differ, the Wolmer's Boys' School past students share a YouTube channel called Tripz_Ent, where they share the ins and outs of being triplets and use their platform to be role models to their audience of more than 5,000 subscribers.

“Our vision is to become an influencer of our generation and a world brand in itself to positively impact the world and to inspire others – that dreams do come true,” Jon-Michael said.