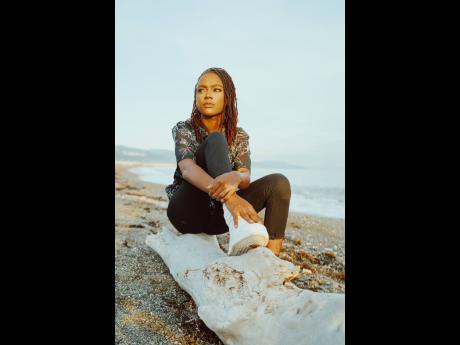 At 24, she’s singing about her pessimistic perspective on love and becoming what she despises because of unhealed trauma. Her openness volumises when she says, “Smaddi check pon mi mental,” every few bars, while she patiently waits for God to “fix” the Kyoka who has now lost faith in mankind.

It’s an autobiographical account that was further inspired by her friend’s own battles.

“I’ve had my share of heartbreak, depression, and anxiety like most people, but the whole reason why I finished the song is because I have a friend who was really going through it – and he’s still going through it – but he’s getting better day by day,” Kyoka told The Gleaner. “He actually attempted to commit suicide twice, and I’m thankful to God he’s still here, so he’s the reason why I decided to write this song and just put it out as a project.”

Kyoka shared a video of her singing the song in March that ultimately went viral after being shared by a blog page. Several producers flooded her DMs with offers, but she decided to sign with Los Angeles A&R Chris Blackwood – who oversees producer Rvssian’s Rich Immigrants label at Interscope Records – and Nicholas ‘Zimi’ Mahfood.

The track was recorded and a Ruption-directed video was released on Kyoka’s birthday on October 8. The visuals see Kyoka reflecting on a tumultuous relationship through soulless stares, a bloody bathtub, and a cliff-hanging siren lights scene.

“I’m not the type to show it, but I’m really excited,” Kyoka said. “The feedback has been great, and I hope it’s something that blows up and a lot of persons get to hear it. I feel like it’s a song many people can relate to because I’ve been getting a lot of DMs on Instagram and TikTok, with people sharing their story with me.”

Even more gratifying is the sort of healing it has offered Kyoka and her friend, who, she says, “promotes the song more than I do. He’s definitely one of my biggest supporters”.

Given name Tasheka Kyoka Bernard, the arts have always been an integral part of her life. Raised between Steer Town, St Ann, and Montego Bay, St James, Kyoka recalled being active in theatre arts and participating in the Jamaica Cultural Development Commission’s performing arts competitions while attending the Marcus Garvey High School. It was then off for higher studies.

“I had started the Brown’s Town Community College to do CAPE, and a few months after I started, my dad died, and I had to stop going to college because it was affecting me mentally,” she shared. “About a year or two after he passed, I went back to a private college and finished my CAPE studies.”

She didn’t take her eyes off the music path and started to post freestyles on Instagram and Twitter. The initiative saw Kyoka confronting her self-confidence issues, and the positive feedback on her talent has helped her to break out of her shell.

Though she’s one single down, her transparency about her trials complements a new wave of talent including 450 and Yaksta. Having made such an impression, Kyoka says that “you should just expect greatness,” as it relates to her upcoming music.

As for the distant future, “I just hope that a lot of persons are able to identify me as someone great, not only in music, but as a human being as well. I hope that my voice is being heard a lot, and I hope that I’m able to connect to and reach a lot of persons not just physically, but mentally and emotionally.”