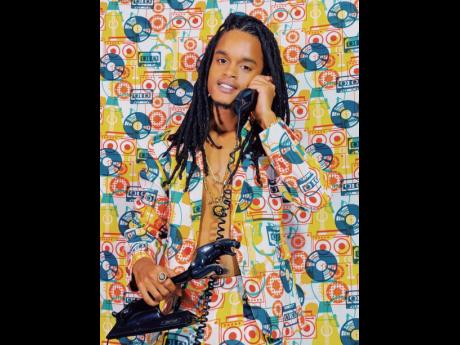 Azizzi Romeo, the son of veteran reggae artiste Max Romeo, may not have his father’s iron shirt to put on to chase the devil out of the Earth, but he is nonetheless fully armed and ready to slay all that is evil. His weapon of choice is love, and with a name like Romeo, that is hardly surprising. But the pursuit of romantic themes through music has never really been Azizzi’s cup of tea.

“I am a reggae artiste who does roots revolutionary music,” he said honestly. “But I decided to do a project of love songs, because it is one way against the pervasive violence. Sometimes being harsh and dread is not the answer.”

He added, “There has long been an outcry against domestic violence, abuse of women and children, and the list goes on. How can you just kidnap a woman and have your way with her? It is important that we show love to each other. Men need to focus on loving their wives. Love does not have a religion.”

Last Friday, Azizzi released his third EP, complexly titled Catharsis. It consists of seven tracks which represent several genres, among them reggae, R&B, hip-hop and Afropop. It was a project on which he has credits as writer, producer, as well as the mixing and mastering of the tracks.

“I have a studio at my home, and I have been playing instruments and writing, and using Logic and Pro Tools software for a long time. Plus, I was fortunate to learn a lot from my father and the team he has around him,” Azizzi shared.

He noted that he ended up pouring out his emotions on some of the tracks.

“Midway through the creative process, I realised I was purging myself of the past; my mind had become as light as a feather. I had confronted my inner demons and subjugated them. So I decided to name the project Catharsis,” he explained.

Catharsis is being released along with a visualiser, shot in Azizzi’s studio, for the romantic track three, Feelings.

“If you love somebody you’ve got to show it delightfully. Make your spouse feel a sense of assurance that you will be there in the best of times, and the worst of times. Provide emotional support, make them forget the negatives and look at the brighter side of life,” he emphasises.

The singer is hoping that both men and women will listen to the songs on Catharsis and find love. He also wants to establish himself as a producer and an artiste through this project.

“I have so much more in store and much more to offer,” the son of Max Romeo said.

Azizzi has been singing and releasing music since 2007 on Charmax Music, an Indie label founded by his father. Formerly half of a duo with his older brother, Azizzi, since 2015, has been touring with his father as a solo act.

Catharsis is out on all streaming platforms and is being distributed in collaboration with Zojak International.