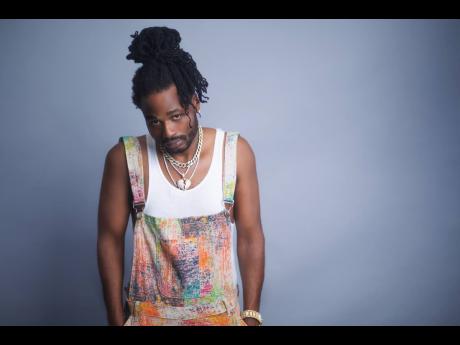 Contributed
Bramma knows the importance of singing from the heart.

Every opportunity he gets, dancehall and reggae singjay Bramma tells his peers to “sing from yuh heart and it will reach”. It’s a philosophy that has helped him to thrive in the music business for more than 15 years, though he’s not the most celebrated artiste. Speaking to The Gleaner, Bramma said he is no longer concerned with the latter.

“Mi used to question it and wonder why dem nah tune in to weh me a seh and when mi start realise life and mi start grow, mi start seh, ‘Who are you to decide what God is gonna bless you with?’,” Bramma shared. “Let’s be realistic now. Mi come from a one bedroom in Maxfield, Kingston 13, wid me and mi mother and mi nuh waan it sound like me a brag or anything but everything weh mi have today – mi house, the cars weh mi have, the places weh mi go inna the world – I’ve received that through music, so who am I to say I should be somewhere else when God tek mi from nothing to being right here? Mi mek money outta dah business yah. Mi never, ever do a nine-to-five yet. Mi never sell no drugs, never rob nobody, a music mi sing and mi deh yah same way. It’s just my journey and mi grateful fi all of the experiences.”

His perspective is reinforced by the reality that the music industry supersedes Jamaica. For instance, his 2014 song, Weh Mi Do, may not strike a chord with Jamaicans, but it gives him VIP treatment in cities like San Diego.

“That song went number one on Tribe of Kings countdown in San Diego so when mi go San Diego a limousine pick me up and mi a get a different love than weh mi a get from the people inna Jamaica,” he said.

“Sometimes mi feel a way when you go outside of your country and see how people react to your music and actually mek yuh feel like, ‘oh, mi cya stop do this cause dem people here depend on me,’ so me just tell nuff artistes fi keep inna the back a dem mind seh yeah, Jamaica a we home ground and we haffi always try keep current out here, but do remember that it’s a big world out there.”

He’s going to get a feel of his stardom beyond Jamaica when he heads to Seychelles in East Africa next month for a show.

“I don’t know nothing about this place but the promoter reached out to me and said he wants to book me and Anthony B,” he started. “When mi talk to him and ask him about certain songs weh everybody out here know, him don’t even know the artiste but him know a song like Dancehall Rock with me and Anthony B and him can sing a song like Mi Nuh Trust People which I did on the Peppa rhythm for Stephen (McGregor)… With that said, is music we a do and mi might nuh have millions of fans like some of unno favourite artistes but the likkle bit of fans weh mi have, mi appreciate and love them and mi a cater to them.”

Bramma released his debut album, Rugged & Deadly, in 2020, which was produced by Riddim Force Records. The set showcased his growth and diversity through roots and reggae offerings, and bore features with names like Freddie McGregor, Luciano, Stephen ‘Di Genius’ McGregor, Anthony B and Zagga.