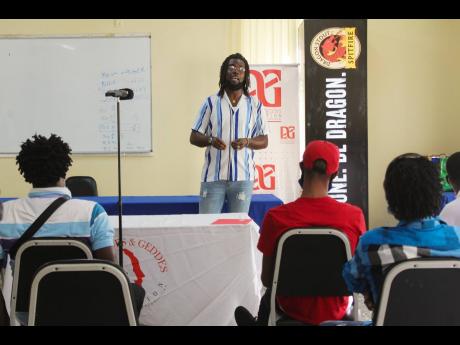 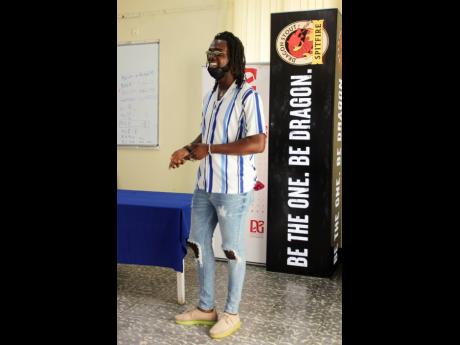 Stephanie Lyew
Recording artiste and songwriter Yaksta cracks a smile during the Dragon Be The One reasoning session held at the Twickenham Park Training Centre on Wednesday.
1
2

“We are all alike,” said Yaksta to the room full of men from the Windsor Farm training programme as part of the Dragon Be The One campaign. The recording artiste, in a reasoning session which was held at the Twickenham Park Training Centre on Wednesday, examined male identity while drawing on his own experiences to share with the participants, who hailed from the communities of Sydenham Gardens, Windsor Park, Horizon Park, Spanish Town and Old Harbour, considered at-risk or prone to high levels of violence.

Speaking to the group, the fast-rising entertainer shared that humans are naturally intrigued by violence observed by the content shared on social media, and even with music recorded. And, Yaksta was obviously prepared for the stream of questions the men would throw at him about the violence in Jamaica’s dancehall music.

“You have me at 28 years old, then, the younger artistes like Skeng and Jashii, who just exit high school. But what is cool to them now may not be cool to them five years after. Me and all ah dem ah fren, by the way, and me can tell yuh dem have nuff positive music,” he said. “The mind is young, but they are wise and very literate. When you look on their lyrical compositions, it is fluent and filled with onomatopoeias and all of those things instilled into the songs, but it is what they see.”

Yaksta, who was recently named by Pandora as one of its ‘Caribbean Artistes to Watch for 2022’, first entered the music industry with hardcore songs, common in dancehall culture where male artistes had to show a hardcore and thick-skinned side — often with violent and sexually tinged lyrics.

He explained, “It is like the projection in society is always based upon violence. Me will preach everything that is positive but do something negative, and it will be the first thing on the headlines. The positive will only impact when there is no more room for negative.”

Yaksta further explained that, when an artiste receives their first hit song or a significant amount of earnings, and if it was reaped from a track that is considered hardcore, the artiste will want to repeat that same success.

He said, “If a man goes out on the road and realise it slow, it will be like you regress, but that is where we, the artiste, have to decide to create a balance with the positive. Otherwise, we end up promoting violence most, allowing negativity to outshine or having a trend. It boils down to attention span, too.”

The Emotions artiste then allowed each participant an opportunity to air their concerns and business ideas, to which he said they should not allow personal tragedies to be setbacks. Throughout the reasoning sessions, Yaksta repeated the statement “we are all alike” and Dragon’s tag line, ‘Be The One’, to share that he understands what young men have to face in today’s society, and hoped it would open up the conversation further.

“It is important to be your own self-motivator; nobody can be that for you. With every business idea, many of you are interested in music and farming, but remember to invest, invest, invest; invest a di only interest,” he said.

Following the session, Yaksta told The Sunday Gleaner it was equally beneficial.

“It was a tremendous experience because, as I have said, I share similarities with many of them. So, to interact with them and know they are achieving and want to do more was a good feeling. This is something I would do again and keep looking forward to. I hope they take away the concept of time, finance and investment and how to be much more [as] men in society, the real idea of masculinity,” he said.

Nathan Nelms, brand manager for Dragon Stout, said that when the brand set out for the Be The One campaign, it was about positivity and how men interact with each other. Now, it has teamed up with the D&G Foundations to connect with at-risk youths in the community to give life skills training and employability training as they enter the workforce.

“The entire day, the participants were engaged. We chose Yaksta because he is someone that they look up to, and they have seen his journey through his music. But to have him pass through to share his life story and have a rap session where they could ask questions, added value,” Nelms continued.