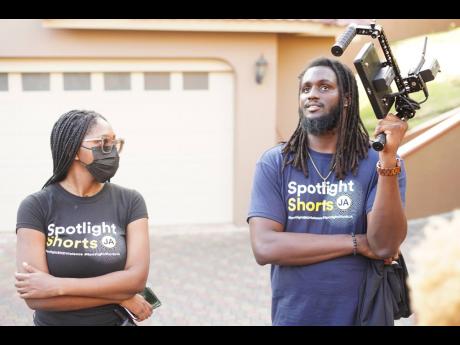 Four teams of Jamaican film-makers and writers are bringing powerful, real-life experiences of survivors of gender-based violence to the screen through Spotlight Shorts JA, a project which is coordinated by the Jamaica Film and Television Association (JAFTA) and the United Nations Children’s Fund (UNICEF).

“The goal of Spotlight Shorts JA is to use film-making to explore, challenge and raise awareness of harmful norms and practices which help drive violence against women and girls,” said Novia Condell, health specialist at UNICEF.

The initiative’s open call was launched in July 2021 and over 100 potential applicants attended a sensitisation session to learn more about the nature of gender-based violence in Jamaica, and the attitudes and behaviours that fuel this type of violence, before submitting treatments for consideration. The four selected projects were each awarded a grant of J$1 million for their production.

The teams and the survivors whose stories are being shared were provided with psychosocial support as part of preparation for film production. Each team was also assigned a mentee – a young person from a vulnerable community who has an interest in film-making – to help build skills and share information about the film industry with youth.

The four films will be screened nationally during the 16 Days of Activism against Gender-Based Violence, an annual international initiative that began on November 25.