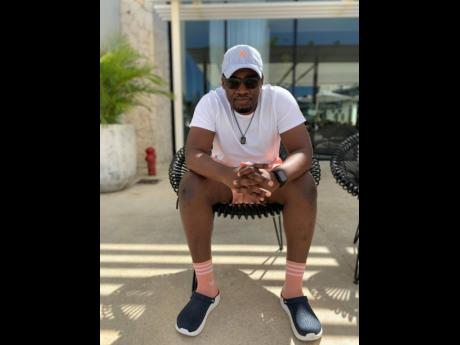 Contributed
Jason Sawyer conceptualised ‘Mask On or Off ‘after working as a sports editor at the 2020 Tokyo Olympics where he began to think about shaping a legacy for himself and future children.

Jamaica’s first blind-dating series, Mask On or Off, is stopping people in their YouTube scrolling tracks to watch pairs of hopeless romantics meet and remove masked layers in a quest to test compatibility waters.

The show premiered on November 5 courtesy of Sora Media with Josh and Jodi, an unlikely pair (according to comments) who have different views when it comes to having a best friend of the opposite sex in each other’s bed. While Jodi attributed her single status to not finding a real one, Josh joked about being too perfect for a world of flawed women. The second episode saw Jamaican matchmakers giving their thumbs up to Adiel and Jaya who seemed to complement each other’s beliefs, life goals and bedroom kinks, though there’s a long-distance factor (which Adiel finds alluring).

Sora Media owner, Jason Sawyer, conceptualised Mask On or Off after going to work as a sports editor at the 2020 Tokyo Olympics where he began to think about shaping a legacy for himself and future children.

“I decided to start my own production company and said an easier way to go out there is to start producing stuff for myself,” Sawyers, 32, told The Gleaner. “I started looking in the YouTube space and looking on content that a lot of persons love and watch but isn’t in Jamaica yet.”

He toyed with the idea of fitness content but thought of dating which was even more attractive when he saw the general viewership. More so, “Jamaicans are not big on dating, we don’t date for what the definition of dating is,” he said, adding that a Jamaican woman who dates is regarded as a ‘call girl’ while the male equivalent is praised as a Casanova. He was inspired to challenge this while catering to the inquisitive nature of Jamaicans when it comes to “man and woman business”.

He relayed the idea to a friend and in a flash, the word spread, and he got a volunteer cast. Sawyers got to planning and went with the mask name beyond reasons concerning the pandemic.

“When you think about it, a lot of us are living our lives under some sort of mask,” he said. “We don’t tell the truth with everything, there’s some things hidden in our lives that some persons will never know.”

The show unfolds with a pair meeting per episode, wearing masks as they ask each other questions. There’s also a “snack jar” segment where the pair sits with backs turned, remove their masks, and go through snacks that they picked for the other. There’s also a freehand drawing segment which sees each pair attempting to sketch their date while masked, moments before doing the big reveal.

Sawyers said the show has been receiving positive feedback with more than 30 people indicating an interest to be on it. His audience also includes 20 per cent American viewership, but he doesn’t take all the credit. As the project is self-funded, Sawyers plays multiple roles on set and has the help of friends to pull it off. He hopes to attract sponsors to do follow-ups and other seasons.

“If I don’t get any sponsors, I really can’t do it cause every shoot day costs maybe over a J$100,000 and that is just including the space, décor, lighting, food ... I’m on to something but it’s not me alone; it’s really a team effort and anything that comes out of the show today and tomorrow it will be shared among everybody because I didn’t and can’t do it by myself and I have to respect everybody that would have planted a seed in the growing of the show.”

Mask On Or Off is aired on Friday evenings on Sora Media’s YouTube channel and will have a total of seven pairs for the first season. Sawyers hopes the venture will bear success stories with marriages and baby carriages.