Stonebwoy proud to be on three Grammy-nominated albums 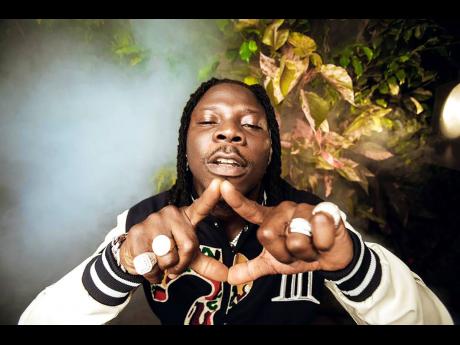 Contributed
Stonebwoy recently concluded the UK leg of the Anloga Junction Tour and is preparing to reunite with family in Ghana.

Ghanaian hitmaker Stonebwoy has been in a “happy” mood. He has contributed to three albums nominated in the Best Reggae Album category for the 64th annual Grammy Awards, and there were no other words to describe how he was feeling at the time of receiving the news. The Nominate artiste recently concluded the UK leg of the Anloga Junction Tour and is preparing to reunite with family in Ghana, but has heard alarms being raised of the new variant of COVID-19, labelled Omicron.

“I just finished up the tour successfully, across London, Manchester and Birmingham – lots of crazy sold-out shows – I don’t think anyone expected this new variant. I know no one on my team did,” Stonebwoy told The Gleaner.

He added, “The news is not even two weeks old yet; I only started getting the information two to four days now, especially where it [is] concerned with the ban on some countries in Africa. As I am doing this interview, I just saw in the news where Boris Johnson [the British prime minister] had ordered [the] mandatory wearing of masks indoors again, as well as outdoors.”

The UK government also announced temporary flight bans from 10 African nations, including South Africa, Botswana, Namibia, Lesotho, Eswatini, Zimbabwe, Malawi, Zambia, Mozambique and Angola. Although his home country has not been added to the red list, Stonebwoy expects that by December 1, he would have travelled to and landed safely in Ghana, and for this reason, he is keeping an ear to the ground, he said.

“The news is fresh, so I am not knowledgeable enough to say too much about it. But measuring it with what has already been happening, I think we are still somehow trying to find our ways out of these serious times. I can’t wait to get back home,” Stonebwoy said.

In planning for the fifth staging of his yearly BHIM Concert event, which is making a comeback on December 21 after being postponed last year, owing to a spike in the number of the COVID-19 cases, the African reggae-dancehall entertainer is hopeful the event will not be affected.

“Moving around was halted at a point, but I think once it opened up and persons had the required necessities, things could get accomplished. So, there are huge plans for the 21st. The variant is new, and we can only be optimistic that the situation does not worsen suddenly again, with travel restrictions and all those different bans,” he said. “There are a lot of things going on from December going into [2022]. I have a Jamaican and an American artiste on the show representing, and would like to be able to have our ‘BHIM (Beam) of Hope’ to share that hope with others. I am also following that with the release of an album in March 2022.”

The project does not have a title as yet, but Stonebwoy, who was invited this year to become a voting member of the Recording Academy, also plans to have the album submitted for a Grammy Award in the World Music category. He said with the albums he was featured on, namely, Pamoja by Etana, Live N Livin by Sean Paul, and Royal by Jesse Royal receiving Grammy nods, he was now “more confident” to put the next album he does up for consideration.

“Everything is lining up properly in terms of the foundation I have created. Hearing these nominations this year were a blessing and honour at the same time, as a Ghanaian musician working my way up to a certain level of recognition. This is a great step in the right direction, owing to the fact that Afrobeats, reggae and dancehall, what I represent, are on all three albums,” he said.

“I am one person who takes a lot of pride in what I believe, in my style, and knowing culturally I am representing a diverse range of sounds and where I am. I take responsibility to be like a pillar for the three genres of music and also in the forefront of it. I have never stopped, and it doesn’t stop here. For the 65th Grammy Awards, I am going to be there; I am coming out with some fire,” Stonebwoy continued.