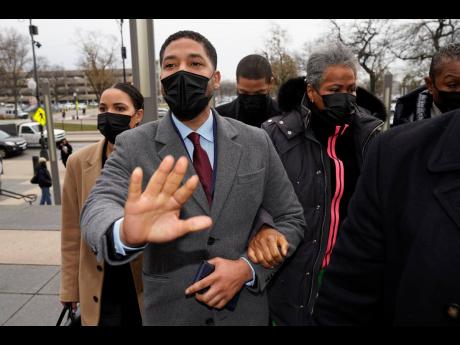 AP
Actor Jussie Smollett asks photographers to move back as he arrives with his mother Janet (right), at the Leighton Criminal Courthouse for day three of his trial in Chicago on Wednesday.

Jussie Smollett, who is accused of lying to police when he reported he was the victim of a racist and homophobic attack in downtown Chicago, appeared troubled when he was told that a surveillance camera did not record the alleged assault, a police detective testified Wednesday.

Chicago police detective Kimberly Murray described how she took a report from the former Empire actor the morning of the January 2019 attack at Northwestern Memorial Hospital, where he was being treated for injuries that Murray described as “minor”. Smollett said two men – one white and wearing a ski mask, the other he couldn’t see – assaulted him as he was returning home after buying a sandwich.

Murray said Smollett – who said he had received a threatening phone call days earlier – refused to hand over his cell phone, which the detective said could help police piece together a timeline of what happened, and he wouldn’t consent to giving medical records or a DNA swab.

She also said Smollett was “upset” when she told him a surveillance camera in the area didn’t capture the alleged attack because it was pointed away from the scene. Murray said she explained to the actor that the cover on the pod camera makes it impossible to know which way it is pointing.

A lead investigator in the case, Michael Theis, said Tuesday that two brothers who worked with Smollett on the Chicago set of Empire later detailed for police how the actor orchestrated the hoax and they participated in it. They said Smollett told them via text message to meet him “on the low”, paid for supplies including a clothesline later fashioned into a noose, and took them for a “dry run” in downtown Chicago prior to the alleged attack.

Theis, who is now assistant director for research and development for the Chicago Police Department, said roughly two dozen detectives clocked some 3,000 hours on the investigation, rebutting a defence attorney’s statement that they rushed to judgement. He said police were excited when they were able to track the movements of two suspected attackers using surveillance video, cell phone records and reports from ride-sharing services.

“The crime was a hate crime, a horrible hate crime,” Theis said, noting Smollett – who is black and gay – reported that his attackers put a noose around his neck and poured bleach on him.

Defence attorney Nenye Uche has said the brothers attacked Smollett because they didn’t like him “because of who he is” and suggested Tuesday that the brothers were homophobic.

Smollett is charged with six counts of felony disorderly conduct for making what prosecutors say was a false police report – one count for each time he gave a report to three different officers. The class 4 felony carries a prison sentence of up to three years, but experts have said if Smollett is convicted, he likely would be placed on probation and perhaps ordered to perform community service.

After their arrest, the Osundairo brothers told police Smollett asked them to stage the attack because he was unhappy about how the TV studio handled hate mail he had received, a lead detective on the case, Michael Theis, testified Tuesday. He said investigators corroborated their version of events using GPS, cellphone records and video evidence and found no instance where they concluded the men were lying.