Nearing 100, Betty White’s life is a page-turner in new book 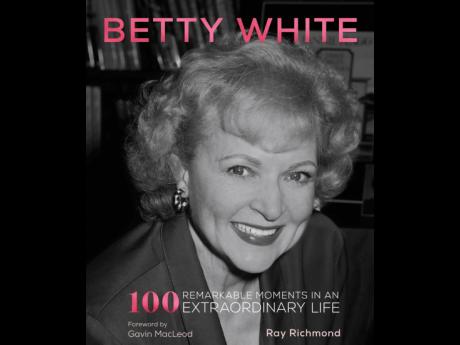 A photo of Betty White, with a dimpled smile and guileless gaze, fills the cover of a coffee-table book released the month before her 100th birthday.

The image evokes the genuine White, according to the book’s author, Ray Richmond. After digging into her life and career, he concluded that she’s as warm and appealing as appearances would have it.

But her willingness to play against type, whether as scheming Sue Ann on The Mary Tyler Moore Show or naïve Rose of The Golden Girls, proves how game and talented White is, said Richmond.

That, coupled with an impressive work ethic, carried her from a cameo on television in its 1930s infancy to the darling of Saturday Night Live in the 21st century, with a myriad of show business gigs along the way.

“You could make a convincing case that Betty White is the most versatile and beloved entertainer in American history,” said Richmond, whose Betty White: 100 Remarkable Moments in an Extraordinary Life (becker&mayer! Books) is out on Tuesday.

Besides starring in sitcoms and making guest appearances in dozens of others, she was a reliably witty game-show host and guest, parade emcee (California’s Rose Parade and New York’s Thanksgiving Day Parade), and soap opera actor ( The Bold and the Beautiful). She dabbled in drama on the big screen (including as a US senator in 1962’s Advise & Consent) and on TV ( Bones, Boston Legal).

Hosting Saturday Night Live in 2010 – at age 88 – earned her a fifth Emmy Award and a new generation of admirers.

White, who will reach centenarian status on January 17, 2022, didn’t participate in the book. Richmond, a veteran entertainment reporter and critic, instead relied on research and interviews with her friends and colleagues, including Carol Burnett, Candice Bergen and Gavin MacLeod (Murray on The Mary Tyler Moore Show).

MacLeod, who died last May at age 90, wrote the book’s forward. Saluting White as a great performer and “national treasure”, he deemed her “one of the most caring and loving human beings I’ve ever known”.

She’s also a pro, said Bill D’Elia, producer with David E. Kelley of Boston Legal. Kelley, who had worked with White on his film Lake Placid, delighted in giving her salty language and bad behaviour to play, D’Elia says in the book.

“David loved the contrast of her image versus what the character was saying,” he said. “She would happily say anything and do anything the story and script called for.”

The book briefly sketches the Illinois native’s early years before moving to a breezily detailed account of White’s success in Hollywood. The great loves of her life – husband Allen Ludden, who was a game-show host, and animals of all breeds – also get attention. Among the book’s photos is one of the couple on the day of their Las Vegas wedding in 1963 (Ludden died in 1981).

There are also studio and publicity shots of White alone and with her co-stars. One was taken the night she, Bea Arthur, Rue McClanahan and Estelle Getty re-enacted scenes from The Golden Girls at a royal variety show in London attended by Britain’s Queen Mother, who is said to have requested their performance.