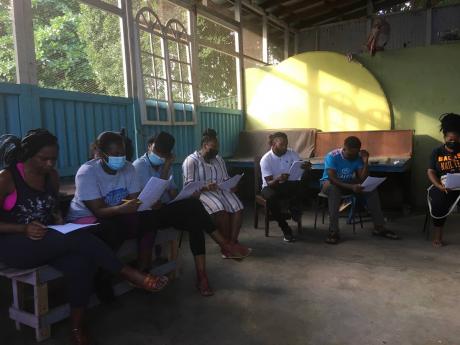 Contributed
Cast members in rehearsal for the 2021/2022 pantomime, 'Rebel K', which is being shown virtually.

From Johnny Reggae to Reggae Son, and now Rebel K, the LTM pantomime has evolved, and this evening at 6 o’clock — COVID or not, lockdown or not — 'panto' will have its annual Boxing Day premiere. The only difference is that it will be in the virtual space.

Production coordinator Anya Gloudon shared that this year, both the traditional December 26, as well as the 27th will be panto days, since there are technically “two Boxing Days”.

Rebel K will be aired on LTM’s YouTube and Facebook platforms, and also on @pbcjamaica at 6 p.m.

“For the rest of this year, at least, viewers will be able to watch Rebel K for free, but I will be taking it down in the new year and putting up clips after that, because we need to make a little money,” Gloudon told The Gleaner.

Rebel K, according to the synopsis, zooms in on Rebeka Richings, “a young woman from an affluent family who has grown up following the wishes and edicts of her overbearing mother. Her true love is music, but her mother, Caroline – or as she pronounces it, Caroleyonne — would never accept anything less than her daughter becoming a doctor and marrying into high society.”

However, while conducting research for a university course, which sees her visiting an inner-city street party, Rebeka is placed on a path to becoming Rebel K. “Caught up in the excitement, she gives an impromptu performance and gets the attention of DJ DuWayne, a young, aspiring music producer. Rebeka throws caution to the wind and agrees to record one song, with the intention of keeping the new adventure from her mother and her henpecked stepfather.”

Gloudon is delighted that the Pantomime Workshop Team have dedicated themselves to making this year’s show a reality, and she couldn’t sing their praises any louder.

Emphasising that Rebel K is “a good deal of fun suited for the entire family,” she pointed out, however, that it is only an hour long, possibly because some of the songs just had to be left out. But the music is nonetheless top class.

“There is catchy music by Grub Cooper and Khafari Beatzz, who is actually our cast member Derrick ‘Khafari Moor’ Clarke,” Gloudon shared.

Rebel K is directed by Pierre Lemaire and the characters and storyline were developed by the Pantomime Workshop team, led by Gloudon.

The production coordinator is hopeful that the message that the arts are relevant and worthy of being supported, especially in COVID times, hits home.