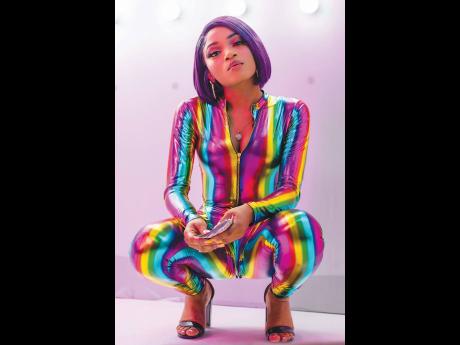 We are on day 671 of the pandemic and Moyann is not running out of ideas to keep her audience on the tip of their toes. Two weeks ago, the fast-rising female dancehall entertainer dropped her music video for her new single, Big Tingz, but before doing that, she had fans in a frenzy on social media.

Moyann shared an image of herself in white with a veil and holding a bouquet of flowers, which she captioned: “A new chapter of happiness”. It immediately sparked congratulatory comments from followers who equated the outfit to a wedding dress, speculating that this was the singjay’s way of revealing she was engaged, or married. Some male hopefuls even expressed disappointment. Meanwhile, those who knew the entertainer’s style quickly caught on to her.

Speaking to The Gleaner, Moyann said that she believes in the institution of marriage, and does not ridicule any woman in her age group who wants to make that step.

“At first, the goal was to get married at the age of 30. Now, I realise it really doesn’t matter what age it happens, as long as the feeling is right,” Moyann said.

The recording artiste has been very active on social media, but mostly uses the platform to share new musical projects, as well as for the promotion of her existing catalogue. She explained that while the platform is for professional purposes, “it would only be right to share something that would be so important to me,” including her tying the knot, because “my fans are part of my journey”.

Her Big Tingz single is on the Upstairs Riddim and is produced by Chimney Records. In the music video, which has garnered over 92,000 views on YouTube, she weds an elderly man whose character is named Bill Bentley III.

“My expectation on this track is for it to be a song that the diaspora will love and feel confident when singing.”

Sharing that she has also received the nod of approval from veteran dancehall entertainers like Sanchez, Moyann added, “It’s a good feeling to see that a successful veteran is aware and is supportive of my craft.”

Aiming high for 2022, she said that her resolution is to work 10 times harder than last year. She was consistent with delivering new audio and visuals on a monthly basis, and is projecting that the only difference will be that she will be doing more, including releasing an EP.

She said, “I’m beyond excited about completing my EP and just my overall contents. I add a lil’ more spice to it each time. And if it is in the stars, I would also love to be signed, as a means to get my music to a wider audience.”

Moyann shared the opinion that female Jamaican acts are getting “the deserved recognition,” but that it requires them to put out 100 times the effort than the males within the dancehall sphere.

“A change is always coming because music is forever evolving,” she predicted for the growth of the genre and her fellow female colleagues.

“While I cannot disclose upcoming collaborations, as much as I would love to, there’s a lot to look forward to. I must also share that I’m currently getting prepared for my long-awaited performance in England and can’t wait to see my London hot gal dem,” Moyann concluded.