‘He was a huge supporter of the literary and visual arts’ 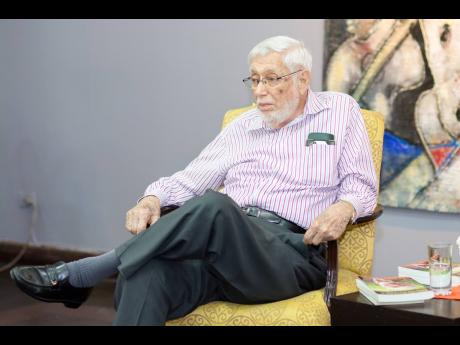 File
Noted poet, educator and businessman, Ralph Thompson died on January 23. He was 93.

Justine Henzell, co-founder and producer of the Calabash Literary Festival, said she is deeply saddened by the death of Ralph Thompson, whom she credits as one of the first to read at the inaugural staging of Calabash.

The Jamaican poet, businessman and educator died on Sunday, January 23. He was 93 years old.

“In 2001, when we started, Calabash was an unknown festival. The people that came did, so in faith, and they trusted us that it would be a good event. Ralph Thompson was one of those people who trusted us,” Henzell said.

In conveying condolences to Thompson’s family and those close to Thompson, Henzell said he was foremost a poet and friend.

“He was a huge supporter of the literary and visual arts. He made the journey to Calabash for as many as he could. He was one of those persons that held Jamaica in high regard,” she said.

Thompson was born in the United States in 1928; however, his family on his mother’s side goes back three generations in Jamaica.

Thompson’s education was heavily influenced by the Jesuits through high school in Jamaica and university in America. After earning his Doctor of Law degree at Fordham University in New York, he served for two years as an officer in the United States Air Force in Japan, after which he returned to Jamaica and started his career as a businessman, painter and poet.

He has given public service under both political administrations in Jamaica and was invested into the Order of Distinction in 1988 in the rank of commander. He was also a regular broadcaster and panellist on Jamaican radio and contributor to Jamaica’s press.

Over the years, he has worn many hats. He was a pioneer for early-childhood education and advocated for the Early Childhood Commission for over 20 years. Thompson was also a former chief executive officer of one of Jamaica’s largest manufacturing companies, Seprod Limited, from 1992 to 1999. He was an integral part of the team that saved the company from bankruptcy.

Thompson served as a director for T. Geddes Grant (Distributors) Limited and as a director of several entities within the Musson Group of Companies. He was also a non–executive director of General Accident Insurance Company Limited.

Throughout his business career, poetry has been ordering Thompson’s passions in his life. He is best known as an internationally renowned poet and painter. He has published more than 20 poems in British, American and Caribbean journals, including The Caribbean Writer and the Mississippi Review.

His work is also reproduced in The Heinemann Book of Caribbean Poetry (1992), A World of Poetry for CXC (1994), several Observer Arts Magazine anthologies, The Oxford Book of Caribbean Verse (2005), and Writers Who Paint, Painters Who Write (2007).

“He was not only involved in the art community, but also very active in the business community. He was a poet and an artist that touched different sections of two worlds. He sat in both worlds, and he did so comfortably,” Henzell said.