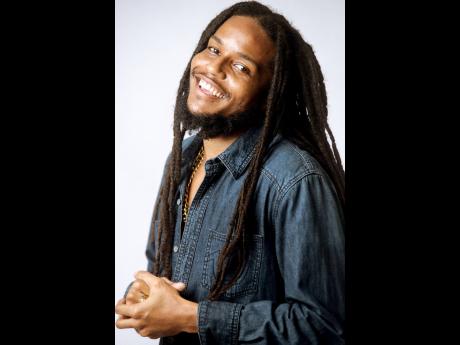 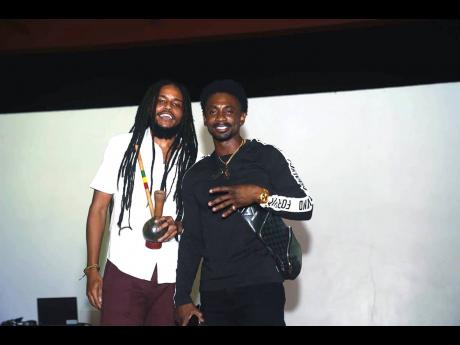 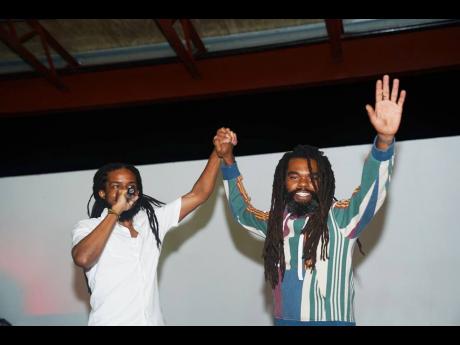 Contributed
Ras-I (left), is in a celebratory mood as he stands with Dre Island during the launch of his sophomore album, 'Kingman'.
1
2
3

Kingman. It’s a regal and responsible way of thinking and being which singer Ras-I provides a soundtrack for on his sophomore album of the same name.

Released today on his eponymous label, the story of Kingman began in 2019 when he started working on the album track Kingman Ting. However, the ‘Kingman’ mentality existed long before that.

“Kingman is the name that they gave to my father, and he lived following the examples of His Majesty,” Ras-I told The Gleaner. “The song is not only speaking about the mentality but speaking about His Majesty and how to live amongst ourselves. Dem call me Kingman too, so it has been passed down to me, and this is now a stepping into the name fully and overstanding what it is about and what it means.”

And by extension, sharing this mentality with others.

“Youths especially,” he said. “We need dem kind of consciousness deh right now, more than ever, because of how life has been for the past two, three years. Separate from the pandemic, with the rise in crime, the mentality seems to have shifted a lot. Consciousness is needed, and more love is needed.”

The nine-track set came together with producers Koastal Kings, JLL, Dale Virgo and Ras-I and is free from genre jails, evident on pre-releases Kingman Ting, Lock It Down and If You Don’t Mind. Interestingly, Ras-I revealed he didn’t like Kingman Ting when he started working on it, but had a heart change when he revisited it in 2020.

“When we dropped it in 2020, people really loved the vibes, and I just felt like the next body of work that I want to put out, or the next level that I want to be at in my music is feel-good music because of the pandemic,” he said. “I just felt like we needed something fi lift the vibes, mek we dance some more, smile some more, and that is how the project came about.”

Add to that the organic chemistry working with friends and featured acts Royal Blu, Christopher Martin and Dre Island, Ras-I declared, “I don’t think they’re any skips on this, mi nah tell no lie. Every song, collaboration and everything shot, and it’s an album that will grow on you more and more. Just go out and stream the album.”

“I feel like I will say ‘best body of work’ for every album to come because I push myself to be better every time,” he said. “Just like every time mi go pon stage mi push myself to be better. Every time we go inna the studio, we just push weself to be better and think, how can I top that album? I remember somebody asked, ‘How you going to come with a mad tune like how you do Crazy Over You (featuring Royal Blu and Runkus)?’. It was like, alright, we haffi give dem something weh dem can love just as much, and dem love Kingman Ting so I’ll always push myself to unlock a new level.”

He continued, “For me, the writing has improved. Musically, we start slashing and dashing a lot of different sounds, and I think that just shows — it might sound boasy — how good we are to be able to take all of these different sounds and still end up making it our own sound so we not sounding like anyone else. This is still we. It is still Ras-I. It is still Jamaica. It is still dancehall and reggae; you can still hear it.”