Sizzla, musicians ‘Rise to the Occasion’ for Reggae Month 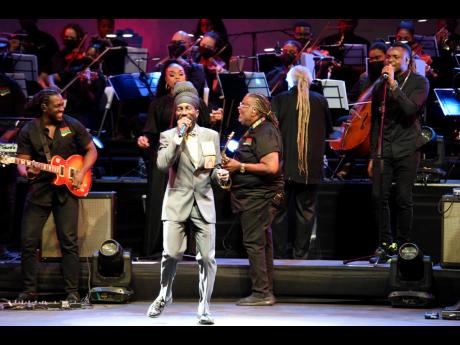 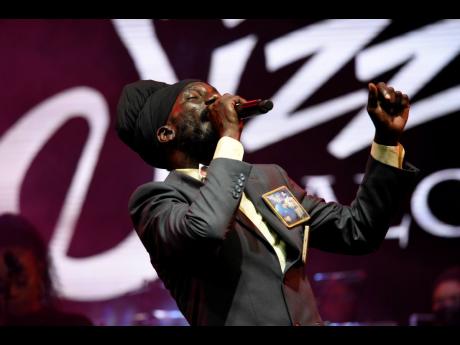 Nicholas Nunes/Photographer
The Rastafarian crooner displayed his class with songs such a ‘Woman I Need You’, ‘Thank You Mama’ and the song from which the concert received its title, ‘Rise to the Occasion’. 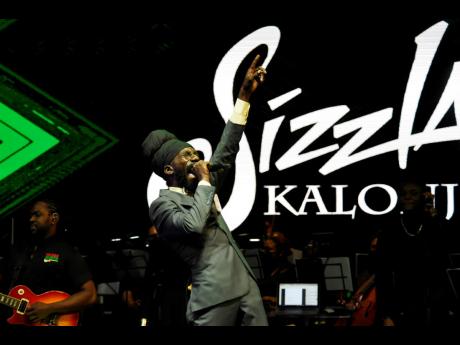 Nicholas Nunes/Photographer
Sizzla’s 20-song set saw him perform the message-filled songs from his extensive repertoire. But he had his decidedly militant moments, too. 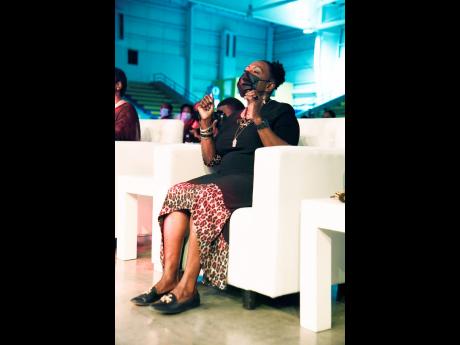 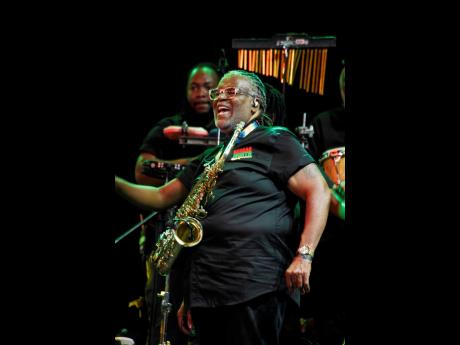 Nicholas Nunes
Saxophonist Dean Fraser, who played the role of musical director, said Sizzla was an excellent choice for a concert such as this.
1
2
3
4
5

History was created inside the National Indoor Sports Centre on Saturday when reggae artiste Sizzla Kalonji lived the words of his now-classic song, Rise to the Occasion, as he was expertly accompanied, for the first time ever, by a 35-piece orchestra. It was fused with Nyabinghi musicians and an authentic reggae band.

It was musicality at its finest as the nattily attired Bobo Ashanti Rastaman released his signature falsetto, chanted spirituality, lectured on how to treat women, repeatedly hailed Reggae Month and Black History Month, and even took a smooth jab at “the bleachers” and moved right along. And Sizzla Kalonji barely stood still. His 20-song set saw him jumping, prancing and “full-joying” himself, pausing only to heap praise on the musicians and the organisers in a show of humility and gratitude.

Possessing a full understanding of this particular assignment, which was curated by the Ministry of Culture, Gender, Entertainment and Sport in celebration of Reggae Month, Sizzla displayed his class and his craft as he unhurriedly performed the message-filled songs from his extensive repertoire. Numbered among his set were Praise Ye Jah, One A Way, Holding Firm, Guide Over Us, Good Way, M ash Dem Down, Simplicity, Woman I Need You and Thank You Mama, a tribute which saw the ‘Binghi’ musicians leading out.

Female dancers, clad in Rasta colours, red, gold and green, and wearing flowing locks, added another dimension. There was one whose choreography saw her openly flirting with the Bobo, and it was smiles all around. But Sizzla had his decidedly militant moments, too, and this showed up in songs such as How Dem a Wonder, Show us the Way, Black Woman and Child, Get to the Point, and the song from which the concert received its title, Rise to the Occasion.

Sizzla clearly “appreci-loved” every moment onstage and, like the audience, he seemed a little in awe of the sheer musical mastery of the Ibo Cooper-conducted orchestra as the violinists’ sticks danced in total harmony as they produced real reggae music. “Thank you, Minister Grange, for curating such a beautiful show for Reggae Month,” Sizzla said in closing.

It was befitting that, at the end of the concert, the audience, too, rose to the occasion and gave Sizzla, the orchestra, the band and the musical geniuses Jon Williams, Ibo Cooper and Dean Fraser a standing ovation.

For saxophonist Dean Fraser, who was “bestowed” with the title musical director, the concert represented a significant moment in time for reggae music.

“The musicians put everything into it and made my job easy, because that is the calibre of professionals we have here in Jamaica. They are able to play at the highest level and make the music rich and musical. There is no greater feeling than when the music is being respected. I’ve done John Holt in London with a full orchestra and Beres [Hammond] in the States, also accompanied by an orchestra, but to see it done on our own soil with Jamaican musicians is pure joy. A Jamaica this a give we own self-justice,” Fraser told The Sunday Gleaner in a post-concert interview.

He added, “Concerts such as this should have been happening regularly in our music. I really wish that U-Roy [the Godfather of Dancehall] could have received a concert such as this. But Sizzla was an excellent choice; he is young, he has the repertoire, and this [concert] was really a joy to behold. You couldn’t want anything more. But kudos to Minister Grange and all those who made this happen.”

Reggae Month 2022 is being celebrated under the theme ‘Come Ketch de Riddim’.