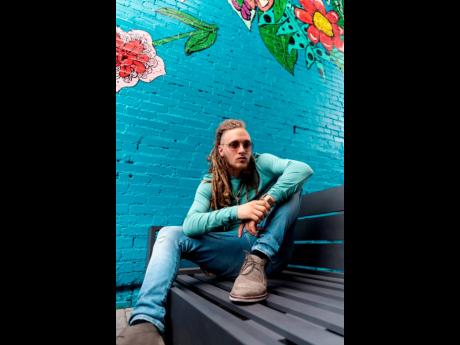 Contributed
Rob Diesel said the themes within the reggae and dancehall genres made a lasting impression on his life.

International recording artiste Rob Diesel is still pumped about breaking into the iTunes Hip-Hop/Rap Top 100 Charts after releasing the single Rasta in America (Fly Ras) nearly one month ago. The entertainer held a peak position at number 93 and remained within the 90s for a few days.

“I was actually not too focused on the charts. The song is a reflection of me … welcoming persons to enjoy that side of me that’s full of vibes,” the artiste told The Gleaner.

The Philadelphia-born, golden-dreadlocked artiste said that he was raised on a diverse collection of music, from reggae to hip-hop and those made by classical composers. However, the themes within the reggae and dancehall genres made a lasting impression on his life. When he began pursuing music in 2010, Rob Diesel could not have imagined finding a foothold on the Philadelphia rap scene, but said he made a name for himself in the community as a rapper. He would later venture into the reggae world, assisted by iconic entertainer Spragga Benz, who has been recognised globally for his signature sound and ability to connect with both the reggae and hip-hop audiences.

Over the past decade, Rob Diesel has become proficient at speaking and recording music using Jamaica’s Patois, which can be heard in previously released tracks such as Every Gyal, released under Red Square Productions, owned by Spragga Benz; My Love; Fulla Gyal, and Party Can’t Lock. But that does not make his music authentically reggae or dancehall, he said.

“The idea is to promote Jamaica and the culture (that is one of my major influences) to the world through the music, especially with a fan base that consists of people from all over the globe,” Rob Diesel explained.

Speaking of the latest iTunes Hip-Hop-charted single, he added, “While it is a fusion, the drums and the way the vocals are arranged are more hip-hop and rap-influenced. My team and I don’t believe the language or dialect determines the genre by itself.”

Now, under the guidance of renowned producer Steven ‘Lenky’ Marsden, the Rasta in America project was released and distributed with the hip-hop and rap market in mind, though the musical composition still conveys elements of reggae and dancehall. Marsden, who is responsible for hits like Get Busy by Sean Paul and Everyone Falls in Love by Tanto Metro & Devonte, composed the track, while Edward ‘Krisdavid’ Dodd and Terrence Snape of Tallawah Records are credited as co-producers.

The official music video for the single, which was released on March 2, was shot in New York City and directed and edited by popular fashion film director Ryan Rector. The production was aided by an endorsement from Clarks USA and Parfums De Marly.

“We just love to create great music. It’s a good feeling to know that the track charted, but I don’t think charting always measures the greatness of a song. We do want to get the music to those who enjoy it, though, and charting helps people discover it,” Rob Diesel shared.

The recording artiste anticipates that the hard work he has invested in the production will be recognisable across the hip-hop and reggae markets, and help lift the barriers for him to speed into new and undiscovered streets.

“There are a few collaborations in the works, but I’m not eyeing anyone specifically, overseas or in Jamaica. The energy just has to be right,” Rob Diesel said.