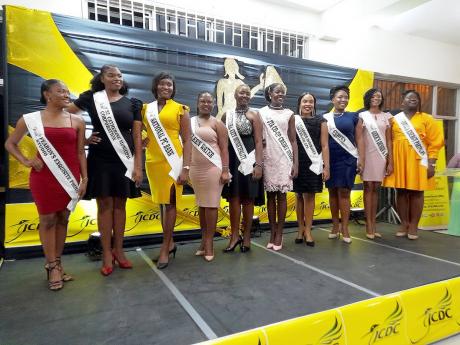 The ladies, except for one who currently works as an administrative staff member at the Eltham High School in Spanish Town, are all attending tertiary institutions and are between the ages of 18 to 25.

At Friday night’s sashing ceremony, held at the Spanish Mall on King Street, Yanique Brown, Raseena Reid, Krystal Crosdale, Gabrielle Thompson, Kavelle Bromfield, Oskeeka Buchanan, Amoy Gilbert, Deondra Edwards, Khadrae Jones, and Aiesha Wright randomly took on the sash with the name of the sponsor who will be responsible for their journey until the June 5 parish final, where the queen will be chosen.

Parish officer Vennessa Patterson told The Gleaner that this year, the parish finals has taken on added significance, with Jamaica celebrating 60 years of independence.

“We were able to select from a wide range of young, bright, and goal-oriented young ladies who have distinguished themselves in a manner that makes them serious contenders for the national title regardless of who becomes the parish queen,” Patterson said.

“The process involved the recruitment drive, followed by the orientation session and then the ongoing training sessions leading up to the sashing ceremony,” she explained.

The parish of St Catherine is no stranger to the national title. Television sensation Dahlia Harris was the first to win the coveted national title in 1990, and following 29 years of famine, in 2019, Khamara Wright, a St Catherine native, again captured the title. Wright went on to reign for an additional year because the pandemic put a break on the contest last year.

The event is being held under the direction of the Ministry of Culture, Gender, Entertainment and Sport, with an emphasis on the theme “Reigniting the Power of the Jamaican Woman.”