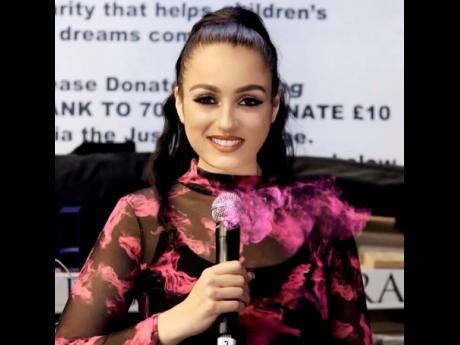 Contributed
During the pandemic Amel Rachedi transitioned to the screens in the digital space with her programme, ‘Brunch with Amel’.

Her passion for reggae and dancehall music was ignited in her pre-teenage years and Amel Rachedi has never found another rhythm that lights a fire in her heart, quite like the Jamaican genres. The songs recorded on the popular Bookshelf and Playground Riddims produced by Tony ‘CD’ Kelly and Jeremy Harding, respectively, were some of the first sounds from the island that she heard at 11 years old, she said, and while cassettes are obsolete, she has a keepsake of them that serve as a reminder of where it all began for her.

“I have a shoe box with the names of all the recording artistes written all over it from the likes of Mr Vegas, Notch, Lady Saw (now Marion Hall), Sean Paul and Bounty Killer. Back then it was cassette tapes and as I speak about them, it’s bringing back good memories,” Rachedi told The Gleaner. “I was young but everyone was listening to reggae and dancehall, growing up in Cardiff, in Wales.”

Envisioning a space where she could contribute to the music that became part of her personality, she found herself in the entertainment sphere as an artiste liaison, managing the affairs of entertainers behind the scenes and coordinated tours and live shows. She became familiar with several artistes from Jamaica, including those travelling to London where she ended up residing. She became inspired to provide a platform for entertainers to speak and share their stories, she shared, but it was not until the pandemic when the sector had paused that she transitioned to the screens in the digital space with her programme, Brunch with Amel.

She said, “Since starting the show in the pandemic it has been a life changer and has opened so many doors that makes me humbled and grateful. I do believe Jamaican music, which I think is simply beautiful, is getting the recognition it deserves and is growing ever day with singers like Shenseea crossing over to America and seeing others like Spice, Sean Paul and Shaggy perform at the Grammys, but it’s beautiful to see reggae and dancehall stories being told as well.”

Rachedi, who was featured by Forbes Magazine for successfully transitioning and pivoting during the pandemic, has travelled to Jamaica for the purpose of creating content and has been exposed to the streets and studio. Since its launch Brunch with Amel has interviewed R&B superstars Keri Hilson and Ne-Yo; Trinidadian soca diva Nessa Preppy; and Jamaica’s hitmakers Tarrus Riley, Shaggy and Sean Paul, among others.

“I’ve loved each of my interviews; they are all special and have their own flavour. I have to say [my favourite is] Sean Paul. Since I was a little girl, he has been my favourite artiste. Having him on the show was a career highlight for sure,” she said.

She said she has yet to find any shortcomings that Jamaican entertainers need to improve on, because all their music are characteristic of their backgrounds and individual experiences, and what she said is important, “is we are all growing and learning every day”.