Sound system owner recalls how ‘everybody hated the name’ 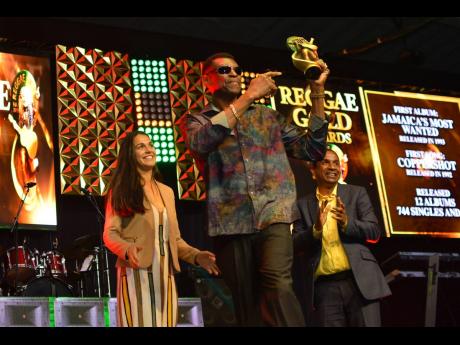 For veteran soundman Winston ‘Wee Pow’ Powell, the term golden jubilee has a “nice sound”, in fact it is music to his ears. The indomitable Stone Love, a sound system which is renowned internationally as an ‘institution’, is this year celebrating 50 glorious years, and the party is starting this weekend with two dates (May 26 and 27) in Bermuda.

“The promoters in Bermuda are very excited … and so are we,” Powell shared with The Gleaner.

Stone Love has been almost grounded during the two years of dearth brought on by the pandemic, and the Stone Love crew is ready to push out, with some amount of reservation. But there are huge plans for the 50th anniversary, which significantly coincides with the celebration of Jamaica 60. Powell is definitely on board with Jamaica 60 plans and is hoping to have a twin celebration and promised to roll out his plans “soon”.

Reflecting briefly on the sound system’s half a century, Powell, who has earned the affectionate moniker ‘Fada Pow’, noted that Stone Love started life in 1972 as a humble component set. As he explained, it was a stroke of good luck that the audio technician who lived in the same big yard as him on Molynes Road had got the player to fix, but the owner didn’t come back for it. The component set was up for sale, and Powell, whose father was a picnic and party promoter, bought it, and “the rest, as they say, is history”.

But it was a bumpy ride initially as Powell added bits and pieces to get a bigger sound, locally built amplifiers to the system, and he started getting gigs – all free. “We started having a whole heap of bad luck … as we set up, we ketch a fire,” he recalled with a laugh. “And then I got introduced to the right technician, Denton from Rose Lane. Meeting him at that time was a blessing.”

He worked hard to establish himself in the business, oftentimes having to be advertised as “a popular disco”, because, “When a man keep a party and the people dem don’t see Merritone, Gemini or Witty sound, Soul Tone, dem nah go. So promoters woulda just put ‘music by a popular disco’. And when the people dem turn up, a you haffi mek use of that. That is your big opportunity to play for a crowd.”

Another unexpected hurdle that Powell had to cross had to do with the name of the set. Powell chose the name from a Supremes song, Stoned Love, and erased the ‘d’. But, believe it or not, everybody hated the name Stone Love.

“I was living in the [Molynes Road] area which was known as a party area and I can remember a particular dominant sound, Gemini, which was my idol. At first sound use to name ‘Sir’, like Sir Coxsone; then it change and people start naming the sound after dem birth sign but I took on the name Stone Love which nobody liked it. They would never gravitate to the name. It was just not tasteful, and we were being jeered a whole lot, especially from a promoter named Sassafras … can’t forget him. So, I tried my birth sign, I called it Pisces, two twos mi hear seh, a Pisces out there. Scratch that. Then mi try Soul Mate, hear that there was a Soul Mate, Scratch that and come right back to Stone Love. They wanted me to say ‘Love Stone’. You know, people are Stone drunk, so that is the concept of Stone Love. Along the way, I added the ‘Movements’ and that is what give a little taste in the people dem mouth,” Powell shared.

Stone Love Movements took over the world and 50 years later, they are still a force to reckon with. Powell admitted that it was not really “a 100 per cent plan to be around for 50 years”, however, when he gave up his job to pursue full time what was then his hobby, he approached it as a serious business.

“I remember that I was very nervous,” he said. “I had done trade as an electrical technician and had branched away into being an elevator technician. So, all those high-rise buildings around Kingston in the early days, like Sheraton Hotel, Oceana Hotel, Mutual Life building, I work on all of them installing elevators. So, being on construction site, I had the plyboard at my disposal and plus I have carpenters who could help me, so we start to build speaker boxes. I didn’t want to be the biggest or the heaviest sound, I wanted to be the sound with the best quality sound. It was a non-stop concept for me. I can’t say it for others, but for Stone Love, is only COVID mek we tek a break, and after 50 years, and pleasing generations of fans ... scratch that, family ... for whom I am greatly thankful and feel blessed, the journey continues,” Powell declared.