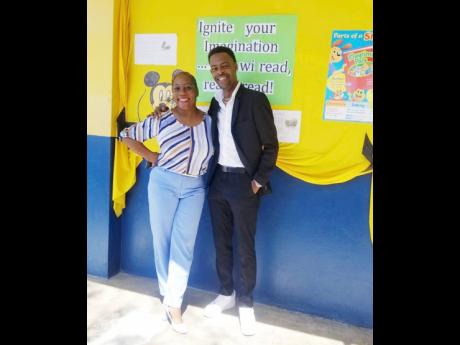 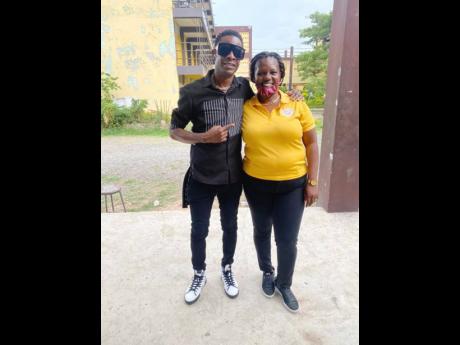 Contributed
Mr Lexx spoke with students at Charlie Smith High School on Friday, and was welcomed to the instituion by principal Laing Smith (right).
1
2

“Every single thing takes hard work and dedication. You have to stay focused.”

That was part of the message Mr Lexx had for grade six students at the Allman Town Primary School in Kingston on Thursday. The entertainer, who is embracing new hats ahead of his intention to retire from music after releasing projects later this year and touring, was captured engaging students in a video on their endless potential and the opportunities that await them.

“They [the school] just reached out to me, and I said you know what, let me go talk to these kids because somebody gotta do the job, somebody has to try to save these kids,” Mr Lexx told The Sunday Gleaner. “I pretty much was trying to make them know seh dem a di men and women of tomorrow and dem have responsibilities, so this is the time for them to tek in what the teachers are telling them, stay in school, respect the elders, stuff like that, because somehow and somewhere along the line, this generation lost their morals.”

A father of four boys and three girls, Mr Lexx has a vested interest in the development of youth. The Mountain View-bred artiste further spoke to them about navigating distractions to excel and pursue their desired career path. The interactive bunch chimed in, listing social media and video games among distractions to be wary of.

Moments before Mr Lexx delivered his motivational speech, he was on Instagram Live addressing other distractions that he believes are permeating music today. Giving listeners the ‘full 100’, he declared that he has no personal issues with any of the new-gen acts but said elements in music today like “chopping the line” should not be glorified. Yet he acknowledged the inevitability of evolution and even admitted that he has found himself bopping to some of the songs before paying keen attention to the lyrics.

“It’s (lyrics today) not something we can change. Every 10 years the generation change and every generation speaks different, their slangs change, they wear their clothes different, they dance different, and so it’s not gonna be the same. Sometimes some things are going to be blown out of proportion, and you just have to control it.”

Still, he urged his younger peers to “tone it down”.

The artiste visited Charlie Smith High School on Friday to speak to teen students and is scheduled for a future session with students at another school. Among the new ventures in this chapter of his life are acting and podcasting, and he sees motivational speaking as part of this brand extension.

“Somebody has to do it, and I don’t mind trying when I have spare time,” he said. “Yeah, I love the bling, and I love the partying and everything, but at the end of the day, morals and dem ting deh is more important, so if I can save a couple kids, then I have done my job.”