Lots of passion at Bring Back the Love 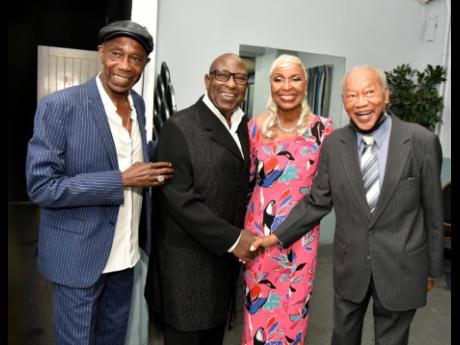 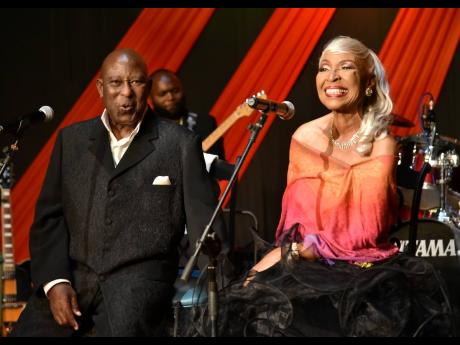 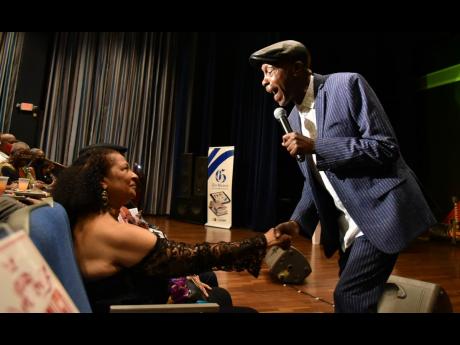 Kenyon Hemans
Jay Douglas gets up close with a member of the audience at Bring Back the Love. 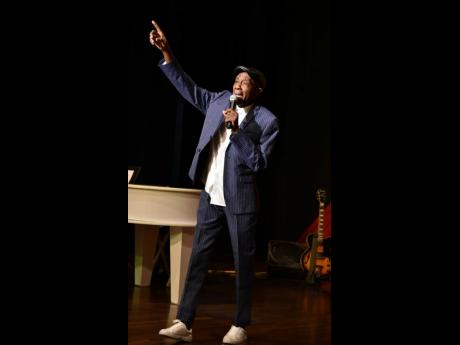 Looking as if they shared a secret which they had a hard time keeping to themselves, the incomparable and always-fabulous Myrna Hague and the illustrious Jimmy James, seated side-by-side and holding hands, opened last Saturday’s concert at the Courtleigh Auditorium. The organisers couldn’t have chosen better curtain-opening optics for a show dubbed Bring Back the Love.

Dressed in a flirtatious, off-the-shoulder frock resplendent with ruffles from the waist down, Hague was in total command of the stage – after all, it’s one on which she has starred many a time – but knew when to graciously acquiesce to James.

Prior to the performances, she regaled the audience with a fascinating story about the first time she saw James perform. It was the Hammersmith Palais in London at a concert which she attended with her mother at age 15.

“It was the first time we were hearing a band from Jamaica … a full black band, all the other bands we were hearing were from the US … and they were so good looking and they sang so good and it was a wonderful experience. I was just smitten and me and my friends formed a Vagabonds fan club and followed them all around,” the lead vocalist of the Jamaica Big Band and the Jamaica Jazz-Mobile said, the memory evoking her trademark girly laugh.

Mega-fan that she was, however, Hague never did get a chance to meet James until decades later when they were both in Jamaica and performed together for the first time on the very stage on which they sat. Their bond has seen them releasing a CD title Love Songs: Myrna Hague and Jimmy James.

With songs such as Since I Met You Baby and Sentimental Journey, and still holding hands and smiling, the pair transported the audience to carefree, halcyon days of love. Sticking to the theme, Jimmy James,who has shared stage with acts such as The Beatles, Sony and Cher, Rod Stewart and Bobby Womack, sang a song he wrote, telling his love interest “before you walk away give yourself a minute”. In closing, he told the audience, “Love is the fulfilment of the law. Only love sets you free.”

Having delighted the full house, Hague and James gave way to their “dear friend from Canada”, who, once he stepped onstage with his crystal-encrusted sneakers, as they say, argument done. Charming, easy-going, soulful and full of dance moves and lyrics, Jay Douglas gave a performance that glittered, just like his sneakers and the collar and edge of his white shirt.

His version of showtime saw him ‘skanking’ as he reeled off big tunes like Lou Rawls’ You’ll Never Find Another Love Like Mine with his equally big voice that filled up the entire auditorium. He took time to big up the backing band, the Dezi Jones All Stars, and despite his decades-long residence in Canada, Jay Douglas proved to be very passionate about Jamaica and didn’t hesitate to show off his command of Jamaican patois. After chatting and laughing with the audience, Douglas, who has made his name from Hong Kong to the Mediterranean and has shared stage with legends including Fats Domino, Percy Sledge, Melba Moore, Toots and the Maytals, and Sly and Robbie, declared, ‘Mek mi do bakra wuk”, and segued into favourites such as Members Only, Signed, Sealed, Delivered I’m Yours and You are my Lady.

Speaking with The Gleaner after his performance, Douglas shared that his motto is: You are only as good as your last performance.

“In the early years in Canada, the band that I was working with was the Cougars and we had the opportunity to work with Cissy Houston – Whitney’s mom. She said, young man, when you get up there, be accountable to your audience … be smart ... kick some a**, and when you get off that stage, be back to yourself. That was her way of telling me ‘work’, and ever since, it stayed with me,” Douglas said.

Part 2 of Bring Back the Love featured Myrna Hague in concert with some favourites; Jimmy James in a soulful solo performance; and the legend who celebrated his 90th birthday on Sunday, Ernie Ranglin.

With his guitar in hand, Ranglin the guitar virtuoso who is highly respected for his unfathomable dexterity and range, held a master class inside the auditorium. Ranglin, who recently played on Two Colours, a collaborative album with saxophonist extraordinaire, Dean Fraser, told The Gleaner that he was “glad to be a part of something that Dean Fraser is doing and I only hope that I can help take this project a little further”. The 12-track set was released by Tads Records and also features deejay Big Youth, on the track titled, De Ranglin.