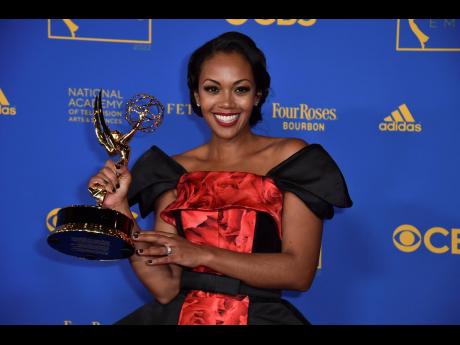 AP
Mishael Morgan poses in the press room with the award for Outstanding Performance by a Lead Actress in a Drama series for her role in ‘The Young and the Restless’ at the 49th annual Daytime Emmy Awards on Friday. 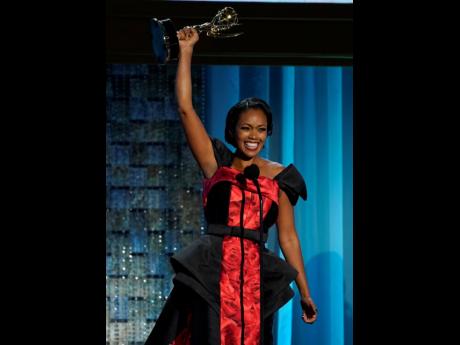 AP
Mishael Morgan accepts the award for Outstanding Performance by a Lead Actress in a Drama Series for her role in ‘The Young and the Restless’ at the 49th annual Daytime Emmy Awards last Friday.
1
2

Mishael Morgan of The Young and the Restless (Y&R) won as Lead Drama Actress, becoming the first black actor to win in a lead category at the Daytime Emmys on Friday night.

Morgan was previously nominated in the supporting category. The 35-year-old from Trinidad and Tobago plays Amanda Sinclair on the CBS soap.

“I am being honoured regardless of the colour of my skin, regardless of my passport, for being the best at what I do,” Morgan said. “Now there are little girls all around the world and they’re seeing another step forward and they know that no matter their industry, no matter their vocation, no matter what, they can strive to be the best at what they do. Not only can they achieve it, but they will be celebrated.”

John McCook earned Lead Actor honours for his role as Eric Forrester on CBS’s The Bold and the Beautiful. It was the 78-year-old’s first win in four nominations.

“I am so glad to get this Emmy, any Emmy, actually,” he said.

General Hospital won Daytime Drama honours, the ABC show’s 15th triumph in the category. It was the fifth trophy earned by the show on Friday.

Morgan is in her second stint on Y&R. She first joined the soap in 2013 and stayed until 2018. She returned in 2019 as a different character.

“I am so immensely proud of our generation. We are breaking glass ceilings left, right and centre, and I am so honoured to be a vessel and experience this moment,” she said. “It’s because of everybody who is out there today who is proving to the world that we can, and we will, do this thing called equality and unity together.”

Kelly Thiebaud was Chosen Supporting Actress for playing Dr Britt Westbourne and Jeff Kober scored as Supporting Actor for his role as Cyrus Renault. Nicholas Chavez won as younger performer in the soap.

A gleeful Thiebaud won on her first nomination. While NBC’s Days of Our Lives won for writing team.

Kelly Clarkson earned her third consecutive trophy as entertainment talk-show host. Her eponymous show also won its second straight trophy for Entertainment Talk Show. The singer is spending the summer with her children and didn’t attend.

Daytime doyenne Susan Lucci, who starred on All My Children during the show’s entire 41-year network run, received a standing ovation. She introduced the In Memoriam segment, which included a photo of her husband, Helmet Huber, who died in March. Michael Bolton crooned his hit How Am I Supposed to Live Without You.

John Aniston of Days of Our Lives was honoured with a Lifetime Achievement Award for his 37-year role as Victor Kiriakis. The 88-year-old actor wasn’t present.

He was introduced via video by his daughter, Jennifer Aniston, who said, “His career is literally the definition of lifetime achievement.” She noted that he began acting in 1962 in prime time and also appeared in such defunct soaps as Love of Life and Search For Tomorrow before joining Days in 1985.

After two years of pretaped presentations because of the coronavirus pandemic, Daytime returned to honouring its own at night-time with an in-person ceremony. In 2020, the show went virtual for the first time, and last year the audience was limited.