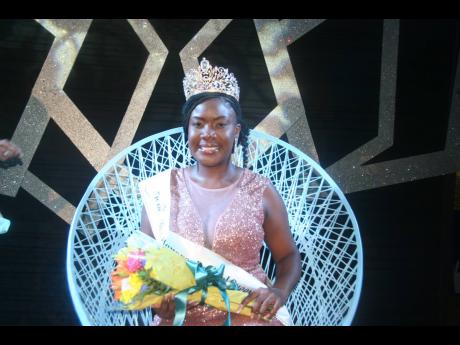 Bryan Miller
Miss Hanover Festival Queen 2022 Marieka Shaw is a medical student at The University of the West Indies.

MARIEKA SHAW, a 21-year-old medical student at The University of the West Indies from Haughton Gardens in Lucea, has been crowned the Jamaica Cultural Development Commission’s (JCDC) Miss Hanover Festival Queen 2022, topping a field of seven contestants.

With a crowd of 700 persons from across the parish in attendance, Shaw, wearing the sash of Miss Seaview Pharmacy, exuded confidence all night on Saturday and copped four of six sectional prizes in the competition, along with the coveted crown.

In the sectional prizes category, Shaw was rewarded as Most Congenial, Most Active in Community, Most Culturally Aware and Most Popular on social media, only missing out on the titles of Most Poised and Best Performer.

The first runner-up to Shaw was 21-year-old Celine Richardson, a radio producer, while the second runner-up was 19-year-old Teacher’s Assistant Briana Johnson.

Apart from the privilege of representing Hanover in the national competition slated to take place as part of the Jamaica 60 celebrations, Shaw will receive as her prizes for securing the top spot – $90,000 courtesy of the JCDC, Orange Bay Health Centre and Reggae Paradise; the JCDC Trophy; a weekend for two courtesy of Grand Palladium Hotel; dinner for two courtesy of Skylark Negril; gift baskets courtesy of Fontana Pharmacy, Bones Auto Sales and Rentals, and Deveena Stylist; a gift certificate courtesy of Lloyd’s Department Store; spa treatment courtesy of Purple Jasmine Spa and gifts courtesy of Rhodes Hall Plantation, Syl’s Boutique, Craig Oates and Fashion City.

The first and second runners-up will also receive cash and several other prizes, as the competition was well supported by the business sector across western Jamaica.

In an interview, Shaw said that she was elated with her achievement of the winning position, pointing out that she was not well on the final day of the competition, but was pleased with the fact that she managed to carry on throughout the final.

Making mention of the other contestants, she noted: “We have all built a friendship that I am certain will last forever, and let me state that each and every one of these girls are queens.”

She plans to embark on a project aimed at improving mental health awareness within the parish of Hanover, as in her view, that aspect of health is being neglected by many persons nationally.

She pointed out that she is “looking forward to representing Hanover in the national competition”, adding that she is growing more confident as time passes.

With respect to her status as a student and how the rigours of the national competition might affect her studies, she stated confidently: “I believe the important thing will be to have proper time management, and with that, I am sure I will be able to reign as Miss Hanover Festival Queen and Miss Jamaica Festival Queen 2022.”

Meanwhile, the competition’s chief judge, Sandrene Hill Sherwood, told The Gleaner in an interview that the contestants in the 2022 competition “were a great set of young ladies”.

“Coming from the prejudging, I have seen the growth coming into tonight’s competition; they have done well. Our top three are some strong young ladies, and based on the selection tonight for the lady who will represent us (Hanover) in Kingston, we think we stand a very good chance of walking away with the crown (national title),” she stated.

She congratulated the Hanover JCDC for the quality of the organisation for the 2022 competition, noting that she was very impressed with the set and turnout for the event.