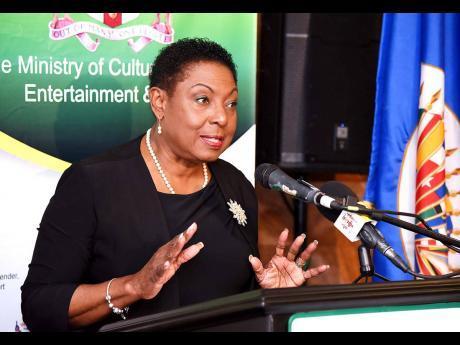 The winning song will be selected following two televised shows on July 14 and 28. There’s a prize of $3 million for the winning song to be shared by the producer, the writer and the singer. -File photo.

Culture and Entertainment Minister Olivia Grange has announced that the process for selecting the finalists for the 2022 Jamaica Festival Song Competition is now completed.

Minister Grange said the selection panel has decided on the 10 finalists.

“We will remember that initially, the panel selected three songs, which was not a sufficient number for a competition. After that, we decided to re-open entries and we received 209 new entries during the course of a week,” said Grange in a statement today.

READ: No Festival Song Competition due to poor entries

She said she was pleased with the response to the re-opening of entries.

Grange said the songs are being mastered and the recordings will be released soon.

She called for broadcasters “to play the songs so that the public will get to know them and be able to choose their favourite for Jamaica 60”.

The Ministry, through the Jamaica Cultural Development Commission, is making arrangements to put the finalists on social media and on global music streaming platforms.

The winning song will be selected following two televised shows on July 14 and 28.

The song will be selected by a combination of judges' scores and telephone voting by members of the public.

There's a prize of $3 million for the winning song to be shared by the producer, the writer and the singer.

Here are the finalists: