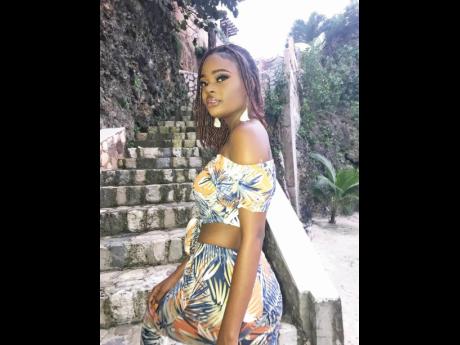 Contributed
Sacáj is one of the vibrant, new faces in the music industry.

On-the-rise entertainer Sacáj sees herself as one of the vibrant, new faces of music and is determined to engrave her name among the greats. Her first huge step towards that goal is the Jamaica Festival Song Competition, a showcase which has intrigued and inspired her since she was a child in Sandside, St Mary. She even has a favourite Festival Song, and didn’t hitch when she was asked to name it.

“My all-time favourite is the great Cherry Oh Baby by Eric Donaldson, of course,” was the instant reply from the Gen Z rep, whose existence wasn’t even a thought when Donaldson won the Festival Song Competition in 1971.

Sacáj is the only female finalist in the 2022 competition, and she is only too aware that it is a contest that has had a mere handful of female winners in its more than 50-year-long history.

But, the former University of Technology student, whose song is titled Nuh Weh Nice Like Yard, remains undaunted and is not looking for any favours because of her gender.

“Being the only female competitor definitely has its pros and cons. Naturally, I stand out because of the singularity of it; however, people tend to look at females as the weaker [sex], the underdog, so I feel like I have a lot more to prove. However, I feel that my song is strong enough to prove all the points. It just comes down to performance, and I fully intend on giving my 100 per cent,” a brimming-with-confidence Sacáj told The Gleaner.

She is now in full marketing mode for Nuh Weh Nice Like Yard, and noted that she has been active on the Internet sharing the YouTube link and utilising social media platforms such as Tik Tok and Instagram, and ensuring that the song reaches the ears and eyes of influencers. Her first live performance was last Thursday at the official presentation show for all 10 finalists, and she is satisfied with her showcase and the reactions.

“The feedback has been great, and I have been sharing the link so that Jamaicans everywhere can go on YouTube and watch the show and, of course, vote for Sacáj. I love my country and it is truly an honour for my art to be a part of this special time for our people and our country, it being our diamond jubilee. The response to my entry has been all positive so far. People are loving the vibe, the energy and the freshness of the sound. I want to write about Jamaica in a new way ... I don’t want to just write about ackee and salt fish,” she said.

It was in 2019 that Sacáj recorded her first single, Mary Jane, a witty ode to the weed. She followed it up in 2020 with First Real Love, a cover version of the D Wisdom’s 1991 ballad, and currently has a collab with Louie Culture.

“Should I emerge the winner of this year’s competition, the plan is to represent my country in the best way I can. Also, I plan to take advantage of that to boost my artistry and my other songs as well,” Sacáj shared, adding that it would be “amazing” to have back-to-back female winners. Last year, dancehall artiste, Stacious, became the fourth woman to win the Festival Song Competition.

Noting that she has been inspired by artistes such as Bob Marley, Marcia Griffiths, Beres Hammond, and Chronixx, she added, “Festival means pride. Jamaican pride is a constant thing, but it is especially potent during this time, and especially this year, which is our diamond jubilee.”

The 2022 album, titled Jamaica Festival 2022 Song Competition, is now live on global music streaming services, including Apple Music, Amazon Music, Deezer, Spotify, Tidal, and Pandora. This is the third consecutive year that finalists have been released on global streaming platforms. The winning song will be decided by judges’ scores, as well as public voting via text messaging in Jamaica and via the Reggae Jamaica App across the world.