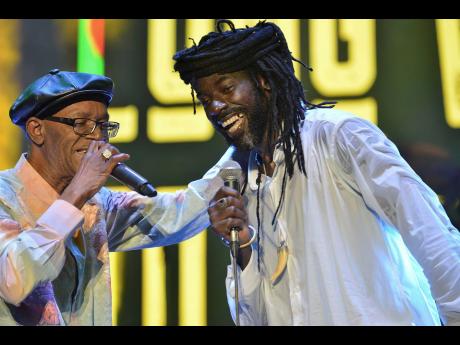 Reggae lovers know only too well that Beres Hammond and Buju Banton in concert is simply magical.

On January 1, 2023, one of Jamaica’s most prolific vocalists will join forces with one of reggae and dancehall’s most resounding voices to give birth to musical artistry that will feel nothing short of ‘Intimate’.

“Team Management in association with FYVE Events and Talent Limited brings you Intimate an evening with Mark ‘Buju Banton’ Myrie and Beres Hammond taking place in Grizzly’s Plantation Cove in St Ann,” the organisers said in a teaser press release.

It added that this “is a special moment in Jamaica’s history” because, for the first time ever, the two are billed to perform together.

“All other performances have been cameos, with one making an appearance in the other’s set. The showcase from the two will find Harmony House and Til Shiloh Bands pumping hits for an excess of two hours full of singalongs, pull-ups, dancing, jumping, prancing and encores,” the producers of Intimate stated.

Over the course of a five-decade career, Hammond has poured his smoky-sweet voice over every kind of riddim track, from the funked-up reggae jams of the ‘70s fusion band Zap Pow to the lush instrumentation of his 1976 album, Soul Reggae, to the spare digital beat of his 1985 dancehall breakthrough What One Dance Can Do.

In 1990, his album A Love Affair for Donovan Germaine’s Penthouse label raised his popularity to new heights. Cuts like Tempted To Touch and Who Say with Buju Banton are still as effective in the dancehall today as they were as pre-releases. The ‘90s proved to be Hammond’s decade, during which he blazed a trail of modern classics for a variety of producers, from the strugglers’ anthem Putting Up Resistance (Tappa) to lovers’ laments like Come Back Home (Star Trail) and Double Trouble (Steely & Clevie).

Hammond started building his home studio in the early ‘90s before it became the trend among successful reggae artistes to take over their own production duties. But his spontaneous method of composing, and his unwillingness to compromise, made a home studio the natural choice. Although the trend of self-production as a whole has, at times, diluted the quality of music coming from isolated individuals poking at computer keyboards, Hammond’s little music room attracts a steady stream of Jamaica’s most talented musicians.

Mark Anthony Myrie, professionally known by his stage name Buju Banton, is widely considered one of the most significant and well-regarded artistes in Jamaican music. Banton released a number of dancehall singles as early as 1987 but came to prominence in 1992 with two albums, Stamina Daddy and Mr Mention, the latter becoming one of the best-selling albums in Jamaican history upon its release. That year he also broke the record for No. 1 singles in Jamaica, previously held by Bob Marley and the Wailers. His 2010 album, Before the Dawn, won a Grammy Award for Best Reggae Album at the 53rd Annual Grammy Awards.