Beres the boss at Reggae Sumfest 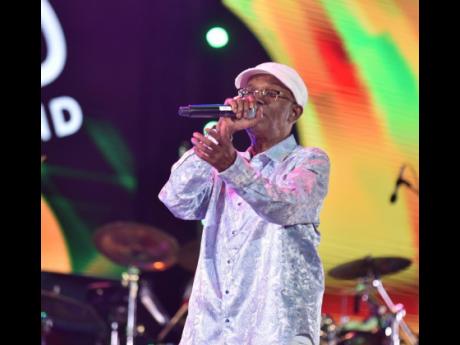 Contributed
Beres Hammond had the audience eating out of the palm of his hands on night two of Reggae Sumfest. 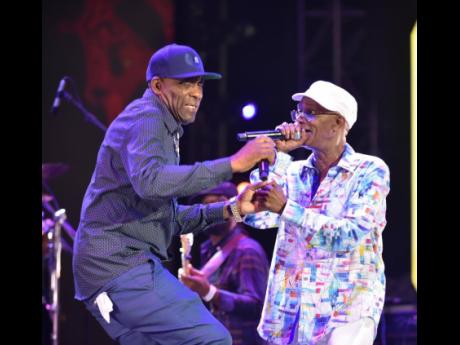 Contributed
Hammond brought on stage deejay Wickerman, with whom he has a collaboration, 'Mi Deyah Again'.
1
2

"Small in stature, big on hits and great with the ladies" is how emcee and radio personality, Richie B, introduced the King of Lovers Rock, Beres Hammond, to centrestage at Catherine Hall in Montego Bay early Sunday morning.

His Harmony House band and his three well-dressed female singers warmed up the stage, and when Hammond made his way at 1:47 a.m., the crowd had already done the expected — abandoned all seats, surged as close as possible to the front of the stage and got ready to be properly entertained. Hammond was the boss, and he did not disappoint the waiting crowd, who really only came fully to life when he touched the stage. (Young artistes, take note).

Smooth and unhurried, Beres delved into his set, starting off with songs such as She Loves me Now and A Little More Time.

And by the time he sang the first lines of Double Trouble, "Now look at me at a quarter to three," (it doesn't matter that the real time was 2:03 a.m.), the Sumfest crowd took it over completely. They did the same mass choir thing with Putting Up Resistance and Can You Play Some More, for which they lived the lyrics ... "I see no statues around..." Even a masked entertainment minister, Olivia Grange, was no "statue". She was seen rocking in the audience.

With the Sumfest crowd in the palm of his hands, Hammond turned it up a few notches — if that was even possible — with No Disturb Sign and Love Means Never to Say I'm Sorry. He even took time off stage for a quick wardrobe change leaving his band in charge.

Hammond also brought on stage deejay Wickerman, with whom he has a collaboration, Mi Deyah Again, and together they "nice up di place".

At 2:33 in the morning, Beres went deep into nostalgia, expressing the hope that Jamaica could go back to the time when we showed love to each other. That was the introduction to his "big chune" Rockaway, where he hails artistes such as John Holt, Alton Ellis, Delroy Wilson, Dennis Brown, Big Youth, Josey Wales and Daddy U-Roy for making this music so wonderful.

Like all of Hammond's performances, he left his audience wanting more.