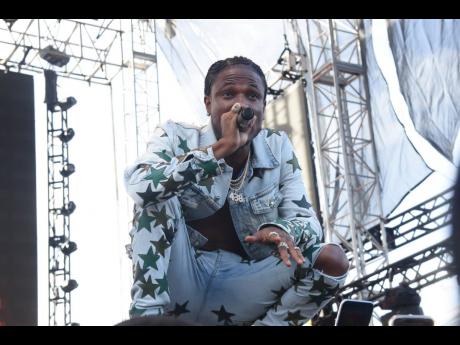 Ashley Anguin
Masicka performs at Reggae Sumfest festival night one. The’Update’ entertainer called the performance ‘one of his best’ and lauded Queen of Dancehall Spice and Shenseea who hit the stage before him. 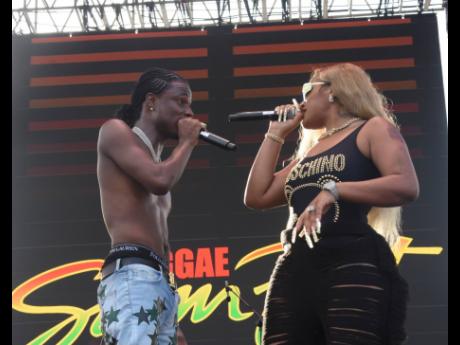 Ashley Anguin
Masicka (left), brought Stefflon Don on stage for a performance of their collaboration, ‘Moments’.
1
2

Dancehall deejay Masicka is modest when speaking about his songwriting capabilities but from as early as high school, he was recognised for having an exceptional handle on creative writing. He shares that he has written for colleagues but avoids singling out any one track that he has written.

“Writing for other people is second nature; I have written a lot of songs for and collaboratively with other artistes in the music industry,” Masicka told The Gleaner.

Owing it to a love for literature, he said, “I read a lot, and it contributes to the way I write. As a student I excelled in my studies and received a one in my [CSEC English B] examinations. I not only love literature as a subject, I actually love song writing and wrote my last album, 438, in about a week.”

It was after graduating from Calabar High School that he launched his first EP titled Last of the Mohicans, on which he collaborated with artistes like Future Fambo and Shanique Marie, which became one of the milestones of his career as a dancehall songwriter. He has earned the respect of seasoned lyricists such as Vybz Kartel, with whom he has the single Infrared, as well as Popcaan, Dexta Daps, and Tarrus Riley. He has even landed collaborations with international recording artistes like Busta Rhymes and Stefflon Don.

“The song with Stefflon Don was a spur-of-the-moment idea. It wasn’t planned or never started out as a collaboration. With Moments, I just happened to send her my lyrics and the rhythm and she write her verse. I know she woulda love it because me nuh write crap and because I love her sound. Immediately I thought of her as the perfect fit,” Masicka explained.

The Stefflon Don collaboration has racked up close to four million views on the official audiovisuals for the track. He further explained that this is how many of the songs he has someone featured on plays out.

“I’m not necessarily eyeing any other females to collaborate with at this time, but if me in the studio and feel it needs the touch of a female, I will think about who and reach out to her,” he said.

Masicka, whose given name is Javaun Fearon, had the opportunity to act as a spectator prior to performing on night one of Reggae Sumfest, having arrived early enough to see both Shenseea and Spice grace the stage, who he said, “represented themselves well”.

“The females, Shenseea and Spice really did a great job on the stage,” Masicka added.

He also lauded his performance as “one of my best” when compared to regular appearances and how well the audience received his music. Masicka had the Reggae Sumfest audience captivated and re-energised as he delivered hits including Top Form and Update. He also brought out Stefflon Don as a surprise guest.

“It was a magnificent moment in the morning hours,” he reminisced during his interview backstage.

The They Don’t Know artiste said there have been several incidents in his personal and professional journey that could have deterred him from pursuing a career in music but that he eats, sleeps, and breathes the mantra ‘your input is your output’.

“You can’t make certain things deter you because from you have life, [it’s] a chance you are given. You can’t make your environment determine your life. If it gets harder, work three times harder. Me know me cyaa poor. I am currently reading Gifted Hands by Ben Carson because I believe in intellectually feeding my mind and giving it positive things so I can give out positive naturally,” Masicka shared.

“There is a whole heap of life to live, but the youths are blind to it, and they also need more opportunity. Youths just need to stay positive and think of ways to create a life their families can be proud of, that the people of their country can be proud of, leave the violence and crime [and] try to leave a legacy for your youths,” he continued.