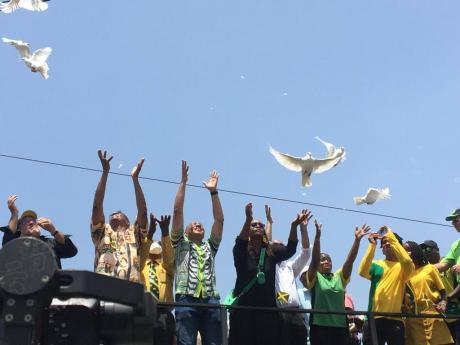 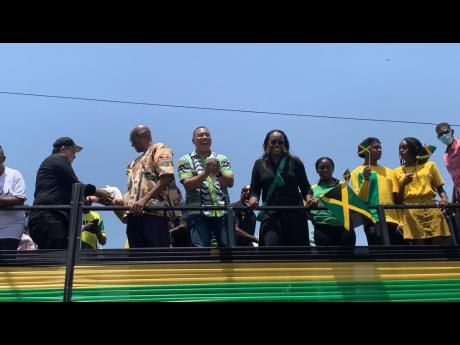 Stephanie Lyew
Prime Minister Andrew Holness cradles a dove prior to the scheduled release, while watching the Emancipation Day parade from a VIP viewing deck in Half-Way Tree Square with members of government and civil society, including wife, Juliet.
1
2

Doves, symbols of peace in many different cultures, were released in Half-Way Tree Square this morning by government representatives, led by Prime Minister Andrew Holness, as well as members of the clergy.

It formed part of the Emancipation Day Float and Street Parade, which returned this year as part of Jamaica’s 60th-anniversary celebrations. The activities began at 10 a.m. The parade started at the Ranny Williams Entertainment Centre on Hope Road, then headed on to Half-Way Tree. It will now head to Oxford Road, after which it will turn on Tom Redcam Drive and end in the National Stadium car park.

Minister of Culture, Gender, Entertainment and Sport Olivia Grange called the release of doves "a symbolic moment of great importance to the nation". "[It indicates] that our beloved country will no longer be held hostage by crime and violence, but has taken flight to a peaceful existence," said Grange in a release.

The statement said doves would be released by Prime Minister Holness; Leader of the Opposition Mark Golding; Minister of Culture Gender Entertainment and Sport Olivia Grange; Mayor of Kingston Delroy Williams, who is also Patron of the Parade; Archbishop Kenneth Richards, chairman of the Jamaica Umbrella Group of Churches; Bishop Conrad Pitkin, chairman of the Committee for the Promotion of National Religious Services; Tua-Shae Shakes, representing the female youths of Jamaica; and John Mark Jackson, representing the male youths of Jamaica.

Grange urged Jamaicans to come out in their national colours and watch the parade in a convivial atmosphere.

“A strong and experienced security team has been assembled to ensure the safety of participants and the viewing public. The team will be made up of police personnel, private security officers and security marshals drawn from various areas in Kingston. The security team will be using a rope barrier to keep patrons and viewers separated,” Grange explained.

A music truck is operating as the VIP viewing deck in Half-Way Tree Square, with state officials, led by Holness, viewing the parade as it passes.

The eight floats on parade are: Crime Stop for Paradise; God is Love; Diamond Heroes (pulled by the Jamaica 60 truck); Sounds of Jamaica; Reap What You Sow; Bridge to Progress; Balloon Float and Sweet Sweet Jamaica.

The theme for the Emancipation Day Float and Street Parade is 'Reigniting a Nation for Peace, Love and Unity'.