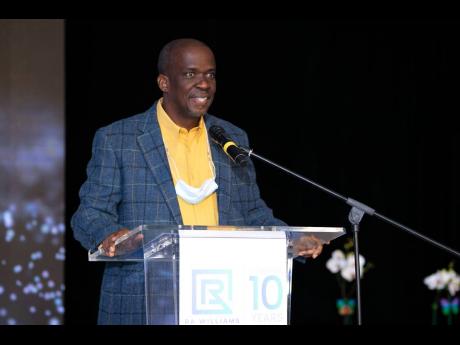 Rev Dr Devon Dick made his feeling clear about Skillibeng’s Whap Whap song on Sunday morning during the ecumenical church service for Jamaica 60, which was held at the Boulevard Baptist Church in St Andrew.

Dick, host pastor at the church, was welcoming the dignitaries to the service when he chose to address Prime Minister Andrew Holness directly.

“Mr Prime Minister, we want to tell you that we support you when you say that you are against that song Whap Whap Whap, because any song that is promoting violence in this country, we are not for it, so we support you,” Dick, whose “whap, whap, whap” intonation was on point, said to nods of approval and a few chuckles.

The song in question, recorded by dancehall artiste Skillibeng and featuring FS, is a ‘gun chune’ which was released in March and has proven to be hugely popular in the dancehall. Whap Whap has racked up close to 21 million views on YouTube since its release four months ago.

The prime minister singled it out for censure at a Jamaica Labour Party meeting in St Catherine on June 12.

“We are being defined by some very limited things. Whap Whap and chap chap and Ensure. All of those things have their place, but it can’t define us. We should not allow that to define us,” Holness told the gathering at the time.

At the service on Sunday, Holness took to the podium for a scripture reading.

Giving the sermon was founder of Power of Faith Ministries International Inc Bishop Delford Davis, the man who has a reputation for “always preaching the undiluted gospel with passion and without fear or favour”.

Minister of Culture, Gender, Entertainment and Sport Olivia Grange quoted from the Bible and Bob Marley, stating that there was “much to celebrate in our diamond jubilee year”.

“With no prejudice, our women have given us much to cheer about, especially in sport ... we are basking in the glow at the recently ended Reggae Girls qualifying for the finals of successive World Cups. On Thursday, Sacaj won Festival Song Competition with the song Nuh Weh Nun Nice Like Yard; last night, Danielle Mayne won the Jamaica 60 Gospel Stars Competition,” Grange said, adding that the prime minister had whispered in her ear that he had something special in store for the women of Jamaica.

The Government, through the Ministry of Culture, Gender, Entertainment and Sport, hosted the service under the theme Reigniting a Nation for Greatness with Gratitude, Discipline and Commitment to God.