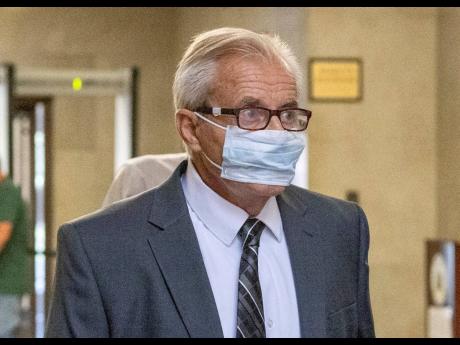 AP
Charles Polevich at the Nassau County Courthouse for sentencing on Wednesday, in Mineola, New York.

The driver in a hit-and-run crash that killed the father of rapper Nicki Minaj last year was sentenced Wednesday to a year in jail, in keeping with a promise the judge made when the man pleaded guilty in May.

Charles Polevich, who pleaded guilty to leaving the scene and tampering with evidence in the crash on New York’s Long Island that killed Robert Maraj, was also ordered to pay a $5,000 fine and had his driver’s licence suspended for six months.

Polevich’s lawyer, Marc Gann, suggested his client may have had a medical issue at the time of the crash and that he wasn’t fully aware of what had happened when he fled.

Polevich, 72, said in court that he’s “been heartsick since realising the extent of the tragedy” and that there was “no excuse” for his behaviour.

Maraj’s widow, Carol Maraj, said in court that Polevich had left her husband “like a dog on the street” and that sparing him a longer jail sentence was a “slap in the face for the family”, Newsday reported.

Polevich struck Maraj, 64, while Maraj was walking along Roslyn Road in Mineola in February 2021. Polevich stopped briefly to ask Maraj if he was OK, but didn’t call for help, prosecutors said.

Instead, Polevich went home, parked the car – a white, 1992 Volvo station wagon – in his garage and covered it with a tarp, prosecutors said. Maraj was taken to a hospital and pronounced dead the next day.

Prosecutors sought a sentence of one to three years behind bars, but Nassau County Judge Howard Sturim said in May, when Polevich pleaded guilty, that he would get “no more than one year in jail”.

Brendan Brosh, a spokesperson for the Nassau County district attorney’s office, said that “given the severity of the defendant’s conduct”, prosecutors felt a stiffer sentence was warranted.

“We continue to express our condolences to the family of Robert Maraj,” Brosh said.

Gann asked for a 90-day jail sentence, arguing that other factors outside of Polevich’s control were partially to blame for the crash, including road construction, street lights that weren’t working and Maraj’s physical condition.

Maraj’s widow, Carol Maraj, is suing Polevich over the crash.

Polevich, who had been splitting time between Long Island and Guam, where he runs a drilling and water purification business, surrendered to police a few days after the crash.

Detectives said they used pieces of surveillance video to track the Volvo involved in the crash to Polevich’s Mineola home.

Nicki Minaj, the platinum-selling, Grammy-nominated rapper of Anaconda, Super Bass and other hits, was born Onika Tanya Maraj in Trinidad and was raised in Queens.

In a post on her website, Minaj, 39, called her father’s death “the most devastating loss of my life”.