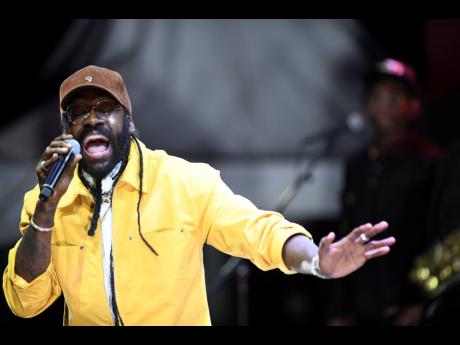 File
Tarrus Riley performing at Reggae on the Pier 2015.

Reggae star Tarrus Riley has taken over the Spotify Reggae Classics playlist. The initiative, supported by VP Records, also sees the Queen of Soca, Alison Hinds, take over the ‘Soca Classics’ playlist in celebration of the Carnival Sounds campaign honouring carnival in the United Kingdom. The selections will also be shared for Labour Day celebrations in the United States.

“VP Records’ purpose has and always will be to advocate for top-tier presentation of Jamaican and larger Caribbean culture to the world. This year’s Spotify “Carnival Sounds” campaign truly showcases this mission in an incredible way. Much respect to the Spotify and Who We Be UK team for being so passionate about this initiative and reaching out to VP to have a real independent Jamaican-owned label be a part of this celebration of the Caribbean community,” Chin said.

ON DA REGGAE AND SOCA TIP

Tarrus Riley is having more than a moment in the spotlight at this point in his career. The biggest reggae and soca event taking place for the Labour Day weekend in New York has announced their line-up with Tarrus Riley among the headliners for this year’s staging of Hot 97 On Da Reggae and Soca Tip on September 2.

Set to take place at the Ford Amphitheater at Coney Island Boardwalk, Tarrus, whose extensive catalogue appeals to a wide Caribbean fan base, is anticipating performing live for his fans.

“Labour Day Weekend is a weekend when the entire Caribbean is celebrated in NYC and everyone comes out to enjoy themselves. Looking forward to performing and rocking the stage with my band, Blak Soil band,” Tarrus said.