Merciless remembered for his humour, rhymes, passion for music 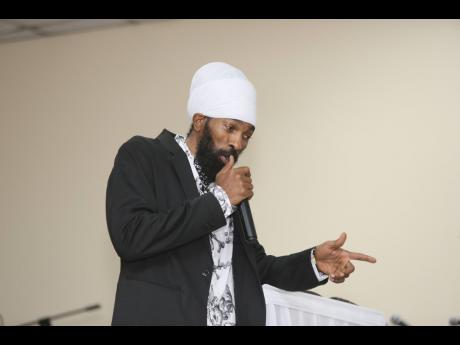 Nathaniel Stewart
Spragga Benz said that his friend was “gone too soon” in a tribute to Leonard ‘Merciless’ Bartley at his funeral service held last Saturday at the St Gabriel’s Anglican Church Hall in May Pen, Clarendon. 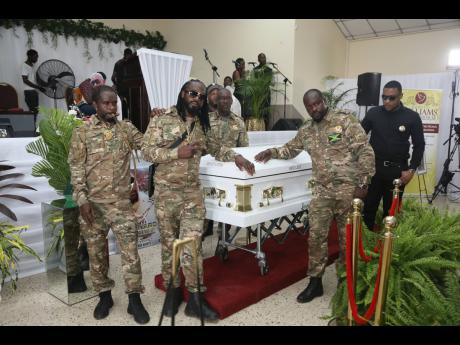 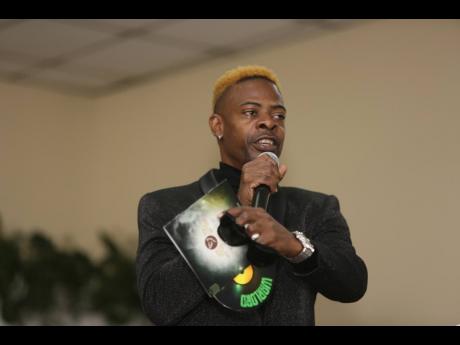 Nathaniel Stewart
Mr Lexx was overcome with emotion as he offered a tribute to Leonard Merciless Bartley at his funeral service last Saturday. 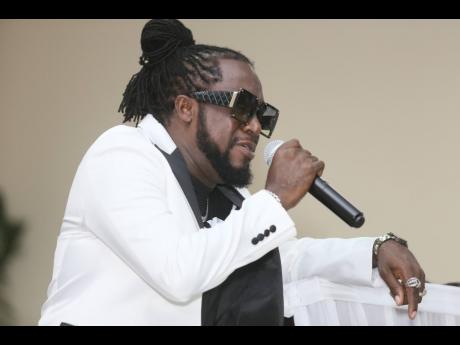 On entering the compound of the St Gabriel’s Anglican Church, where the service for Leonard ‘Merciless’ Bartley was held last Saturday, it was obvious that it was going to be a funeral service with a difference. The gate was manned by security guards, and on the way to the church hall, another stood in theshade, maintaining order as he kept the stage area free, turning away frustrated vloggers who tried to squeeze into the cramped space.

In tribute to the late deejay’s ‘Warlord’ persona, male relatives were attired in army-looking fatigue, similar to that worn by Merciless at the famous Sting 2000 clash, where he was touted as killing Ninjaman, Bounty Killer and Beenie Man in one fell blow.

The tributes, which were mostly in song, touched the emotions; however, Sharon Fielding, from the Wood Hall Church of God of Prophecy, changed the sombre mood to one of rejoicing and dancing as she engaged the audience in a praise medley.

Throughout the service, the unfolding tributes showed the softer side of the deejay’s character, the dedicated son, brother and uncle, as well as the comic and the loyal friend.

For dancehall star and actor Spragga Benz, “Leonard was my brother, was the only person who saw him in a spot and volunteered to help”. His touching acapella rendition said it all about the respect and love he had for the late deejay.

“Leonard, sleep with angels, may your spirit rest in peace …. until my little heart stop beating, there will always be a place for you…” Spragga Benz said.

Mr Lexx, whose friendship with Merciless “goes way back”, remembered him as a master rhymer and one who was always joking. He credits the deejay for grooming him to be the person he is today.

“He was such an amusing person. Everyting whey you sey, him rhyme it. To me, him a di greatest rhymer ever inna dancehall,” he declared in a one-on-one with The Gleaner.

Clarendonian recording artiste and friend of the deejay, Ricardo Suave, hailed Merciless for his precision with lyrics and songwriting.

“He was a spectacular songwriter, the most phenomenal lyricist the dancehall game has ever seen; his rhymes are way out of this world,” Suave said in praise.

The lesson that he will take away from the time spent with Merciless is the Mama Cooking deejay’s tenacity in standing firm in the presence of trouble and great opposition.

Veteran artiste Demus, in paying tribute, reminisced on Mercilesss’s sense of humour and love of drama.

“Mi people, Jah know, all if mi never have a vehicle mi woulda haffi walk and reach yah suh. Yow, mi a tell yuh di truth, de yout’ yah is one a di greatest reggae dancehall music ambassador in Jamaica. Merciless run di most joke inna di music fraternity, him give di most laugh inna music fraternity,” Demus informed as he mimicked some of his mannerisms, giving a moment of comic relief to the mourners.

Kiera Mitchell, Merciless’ niece, shared in the eulogy how her uncle was so hooked on music that as early as age 10, he and his sister Jacqueline would steal out of the house to attend entertainment events. Not even the beating that was administered after could prevent him from doing it again and again.

It was that passion that saw him ditching the plumbing skill his father insisted on to pursue music.

Among the other entertainment personalities who turned out to show their last respects to Merciless were Little Hero, Ricky Trooper, Claude ‘Big Stone’ Sinclair, Fantan Mojah, Twin of Twins and Wasp.

Merciless’ final resting place at the family plot in Turners district will ensure his legacy lives on through the one-of-a-kind mausoleum, which is the brainchild of his older brother, Leroy, and uncles. Leroy notes that the structure will serve as a museum as well as accommodate annual birthday events for his brother.

Merciless was found lying face down unresponsive on Tuesday, July 19, at a hotel on Walker Avenue in Kingston. His autopsy report was deemed “inconclusive”.