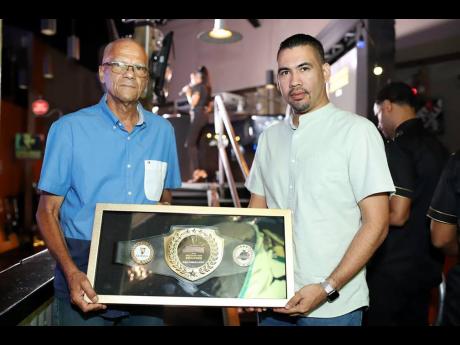 David Harper has big shoes to fill, following in the footsteps of his father Noel, who was made famous by a sound system that has captivated dancehall lovers for decades. ‘Papa Jaro’, the moniker by which the elder Harper is known, built the world-renowned Killamanjaro in 1969 and has been creating waves ever since. For Papa Jaro, with the passion, creativity and innovation displayed by the younger Harper, the future as he sees it is in good hands.

David has already made changes to Killamanjaro, building on his father’s legacy. Constantly gauging the global changes in music and music styles, the young sound system operator is keen on remaining relevant. “Staying up to date is a key factor in any business you run. You have to be creative, and you have to adapt. The ability for us to play in all segments, all genres, and our creativity is what will continue to differentiate us from other sound systems,” said David, who readily admits that his father has been one of his biggest inspirations.

Looking back at the journey thus far, Papa Jaro says he’s thankful for the challenges and rewards that have not only shaped Killamanjaro into what it is but have taken his life along a path he hadn’t imagined. In fact, the elder Harper didn’t start out with plans for a sound system business in mind. All he knew as a child was that he loved music. Then, in his early teens, his older brother Eric built a sound system and he learnt how to operate it. When Eric migrated, their father sold the system and Papa Jaro promised himself he would one day have his very own.

After high school, Papa Jaro began working at a bank because his parents wanted him to pursue a traditional career. Still, he maintained his love for sound systems and ensured that bit by bit he was able to buy the necessary materials to build his own. “I didn’t see it as a business. It was just something I liked, and I approached it like a hobby. It was just for fun. As the demand grew for the service of the sound system it started to look more like a business,” recalled Papa Jaro.

Today, though based in Kingston, the sound system is known worldwide, having performed in major cities in the United States, Canada, Europe, and Asia. Killamanjaro also received the Guinness Sounds of Greatness (GSOG) recognition award this year for its positive impact on the dancehall culture.

Killamanjaro was among four sound systems that received a special award from the brand as it celebrated sound system organisations that have stood the test of time. “We all grew up on the music and the energy created by sounds like Killamanjaro, Stone Love, Bodyguard and Renaissance Disco. They helped to build the sound clash culture that we enjoy today. Guinness Sounds of Greatness is a celebration of that legacy and we’re happy to salute these stalwarts who have paved the way for continued growth in the music,” said Lyshon Davis, Guinness brand manager.

For David Harper, it’s a legacy that he does not take lightly. “Killamanjaro has been a force to be reckoned with for more than 50 years. This is not just music for us, this is life. It’s not just business, it’s how we continue a tradition into the next generation and beyond.”