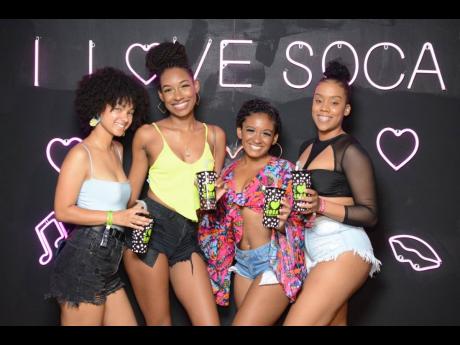 Contributed
Soca and music lovers came out, dressed to impress, for Night One of I Love Soca's Soca+ music festival. 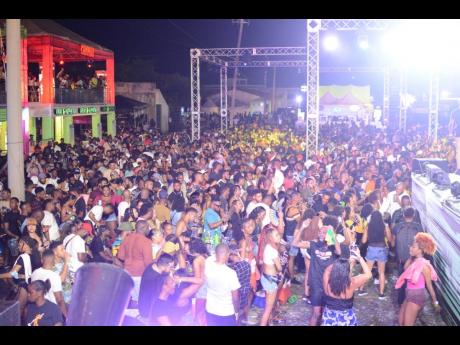 Contributed
Patrons fill the Kingston waterfront Soca+ venue during Night One of the music festival held on Friday.
1
2

All roads lead to the Kingston waterfront and Mas Camp for tonight's staging of Night Two of I Love Soca's Soca+ music festival and retro party Good Times. Speaking with The Gleaner, organisers of both events say they will go ahead as planned, except for Soca+, which will start earlier at 7 p.m.

"We have also been monitoring the weather, and we are moving ahead with night two of the Soca+ festival tonight. We had a fun-filled fête experience last night with our patrons, and we are ready to make even more fête memories rain or stars. We start earlier tonight at 7 p.m., and we ask our patrons to stay tuned to our social media pages for updates!" Andrew Bellamy, managing director of I Love Soca, told The Gleaner.

Over at Mas Camp, 'the 90s-themed retro party — Good Times — will make a long-awaited return after a five-year hiatus. "All plans are still a go," said Jerome Hamilton, a member of The Quorum, promoters of the event, adding that the event has faced its share of unfavourable weather.

"We have had Good Times even when we have heard there is a hurricane coming. That was many years ago when Good Times was a much stronger brand, as we would have consistently been having shows. We had four shows a year at that time. But now we are coming off a five-year break. So we are planning and hoping for the best," Hamilton said.

Tonight's staging features selectors such as DJ Delano and DJ Jazzy of the Renaissance and DJ Liquid of ZIP 103 FM and a guest performance from Sizzla Kalonji.

As they move ahead with tonight's staging, organisers of the throw-back event hope the weather will allow for good times and will not require a reschedule.

"At the appointed time before the event, if we realise it is going to be difficult keeping [the event], then we will reschedule that date for the event for some time in October, hopefully. But for now, it's all systems go. Although we realise and acknowledge that even at this stage with what is happening, people have made up their minds already that they [will] be coming out for the event. For right now, it's too early to turn back, and we have seen many times where the weather man has not been exactly right. I am banking on that possibility. We really don't need any more challenges in the country with something like what this may cause," said Hamilton

The latest bulletin from the Meteorological Service Division has discontinued the Tropical Storm Watch in effect for Jamaica. This means that conditions associated with a tropical storm are no longer expected in respect of Tropical Storm Ian.

Tropical Storm Ian has drifted "a bit to the south", taking it farther from the coastline and taking the island outside the projected range of tropical-storm-force winds, said the release from the Meteorological Service Division, adding that the weather system is instead projected to produce a large area of showers and thunderstorms that could impact the weather over Jamaica through Monday.